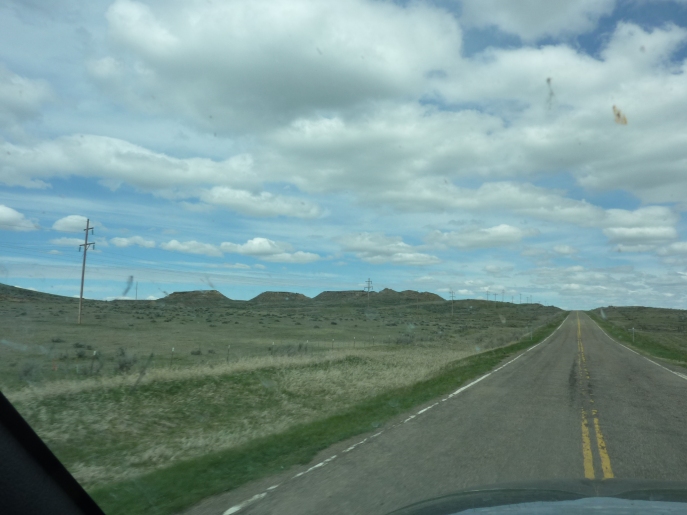 Two things in my life have remained true:

The most recent example of #1 has been the past few weeks. Normally I’m one of those people who likes to have things planned well in advance.

I like to have schedules and lists. I like to know where I’m going if I’m going anywhere and how long I’ll be there. I like planning what to bring or who to bring and what to tell people in charge of who I didn’t bring to expect.

I brought these two.

It might sound a bit uptight but really, its just being organized.

I can be spur-of the-moment if the situation calls for it.

Like the road trip to Banff with Anna and Shelley in the middle of the night years ago.

Or the climb up the world’s third-largest Ferris Wheel in southern Japan without considering how frightening the trip back down would be.

Kind of like my cruise across the Big Sky state of Montana just over a week ago with my 3 traveling companions and a great selection of cds. 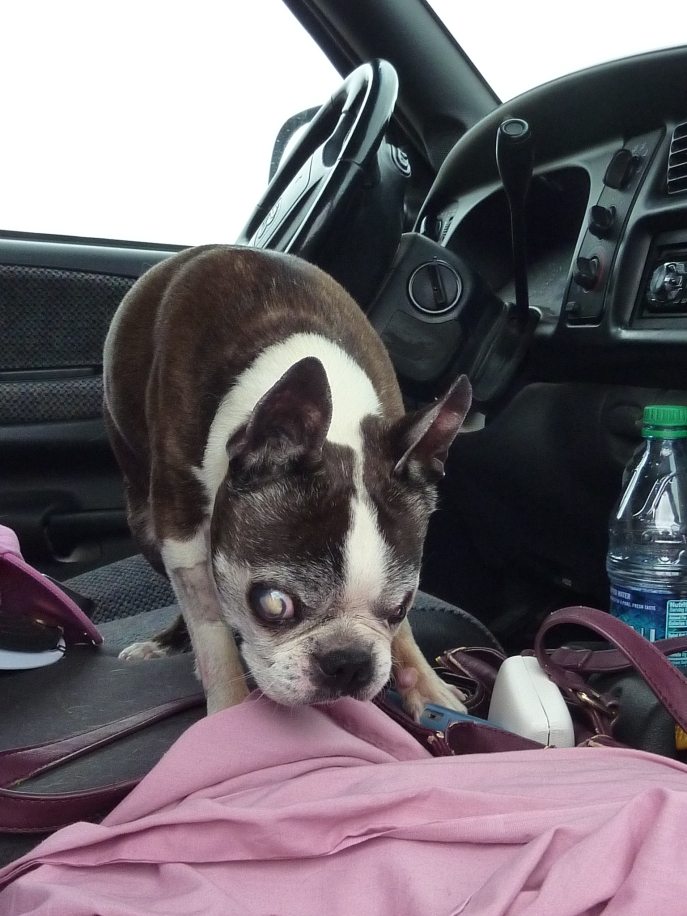 Our amazing house/pet caretaker, Jessi was available on a moment’s notice and I loaded golf clubs, a variety of golf shoes, hats & sparkly ball-markers, bling, dry dog food, canned dog food, dog meds, dressy clothes, normal clothes, farm clothes, and the dogs and myself into the 3/4 ton Ram and we were off on another adventure to Bismarck.

We were off to see Alistair/Daddy/Gampy.

Who was Gimpy Gampy again. 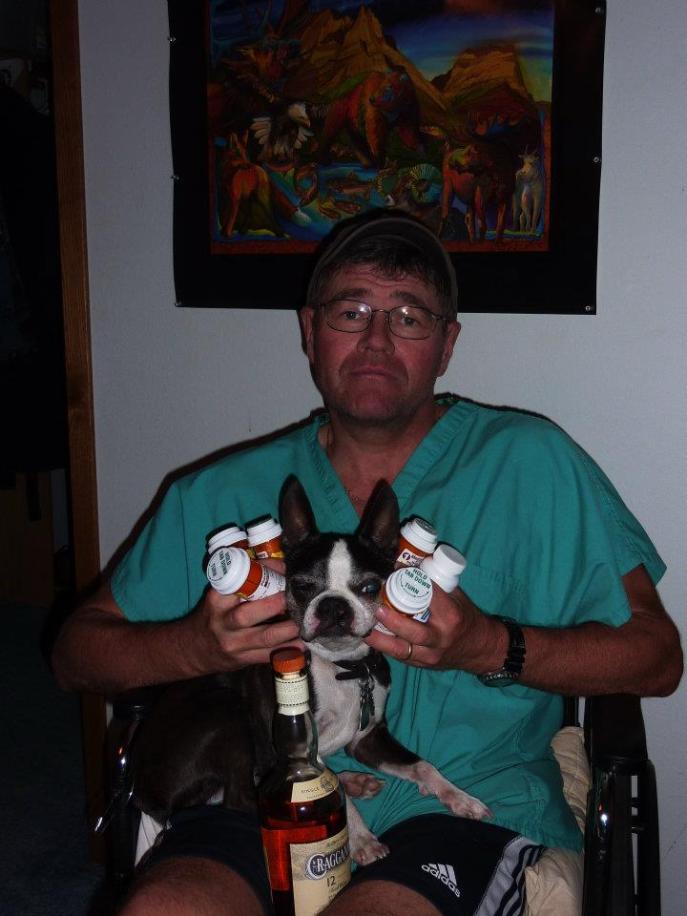 Gimpy Gampy in 2012 pre-op with my other patient… the beginning of the eyeball nightmares for Loki.

He wasn’t the version of himself that required surgery and hardware to stop bleeding and put his broken pieces back together but he was Gimpy Gampy this time because of the hardware. 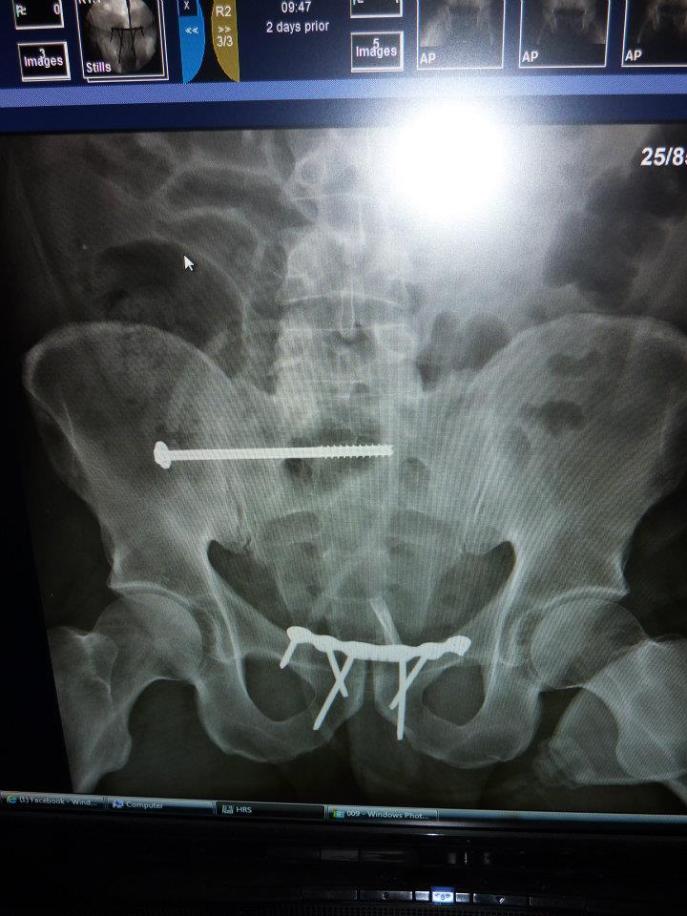 This hardware. (Well, not the big screw… that sucker only lasted a few months).

The pins had all broken and some had begun to migrate. We knew this from x-rays he had taken over time and although they occasionally caused irritation they hadn’t really bothered him until the past few months.

It became unpredictably unbearable 2 weeks ago so it was time to see if something could be done.

A new surgeon on the case in Fargo saw him last Monday and booked surgery for Thursday.

Hanging out on the farm, wondering what each day would bring.

I’m not used to saying to people, “I have absolutely no clue what we are doing tomorrow.”

It doesn’t work for me and I obsess about little things and I don’t sleep well.

And yet, that’s just how it had to be.

Off to Fargo on Wednesday night (2 1/2 hours east of Bismarck) with a new pet caretaker staying at the house with the 3 dogs. We slowly explored the downtown core of the city which is rich in cafes and colorful people and we enjoyed a lovely Italian meal a block from our hotel.

We made it to the 5am check-in and he was whisked off for surgery a couple of hours later. 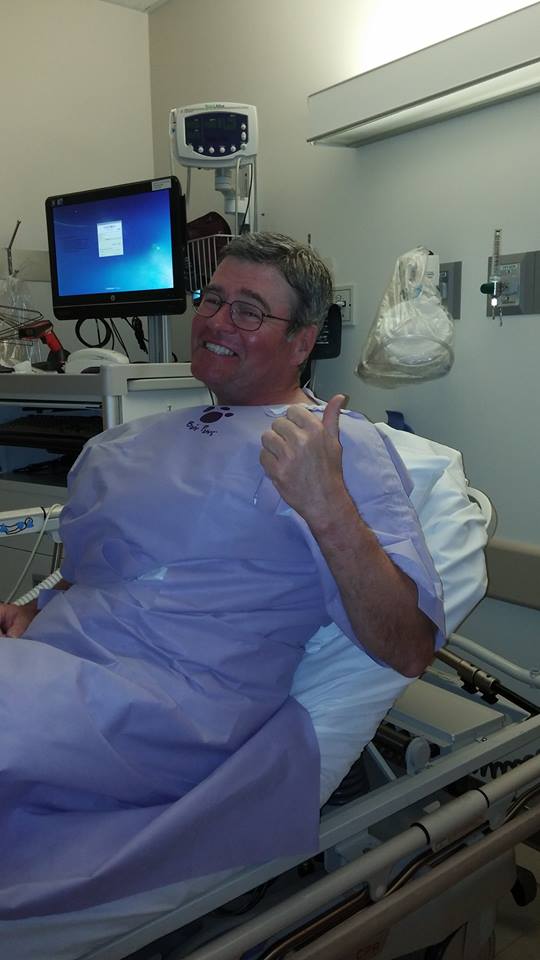 Laughing and joking with the nurses in pre-op. Its how we do things.

And the plate and most of the pins are gone! And, happily, so is a lot of the discomfort and unpredictable pain! He’s moving slowly right now and he’s pretty stiff and sore but we are hoping this has done the trick.

And the dogs and I drove through thick brown smoke yesterday for the 10 1/2 trip to get back to the farm because Jessi’s husband is deploying again and she needed to fly to California.

The smoke is from the devastating wildfire burning up much of Alberta, Canada right now. As dual-citizens we both focus on Canadian news as much as the American stories happening but this fire had me glued to my iPad in the Fargo hospital.

This didn’t capture the smoky haze everywhere. It did capture a lot of dead bugs…

Unusually warm weather and not a lot of snowpack in a dense Borreal forest have made this a nightmare for over 90,000 evacuees, many of whom have no home to return to.

No bikes, no dog food, no TV, no driveway, no patio, no hot tub, no community, no power, and likely no job.

And I bitch about the unpredictability in my life?

I contemplated not going in for groceries because I hadn’t brought sandals to Bismarck, not figuring on the heat wave, so I had to wear my heavy Dr.Martens with socks.

I did it, though. I compensated with fabulous bling.

At least I have shoes. And sandals. And I know where to find them and I know what my next meal is and I’ll sleep in my comfy bed tonight with my ridiculously tight canine companions in my beautiful meadow of a neighborhood and I can choose to play golf tomorrow or not.

But those people in Alberta aren’t so lucky.

I’m doing an online fundraiser with my bling biz. Anything you buy, I get 40% commissions on and I’m donating 100% of that to the Canadian Red Cross. Its not going to be much but its something.

Maybe its a bag of dog or cat food.

Maybe its a box of diapers.

Maybe its a hot breakfast for a family who woke up in strange beds in a strange shelter in a smoke-filled world surrounded by others suffering the same fate. 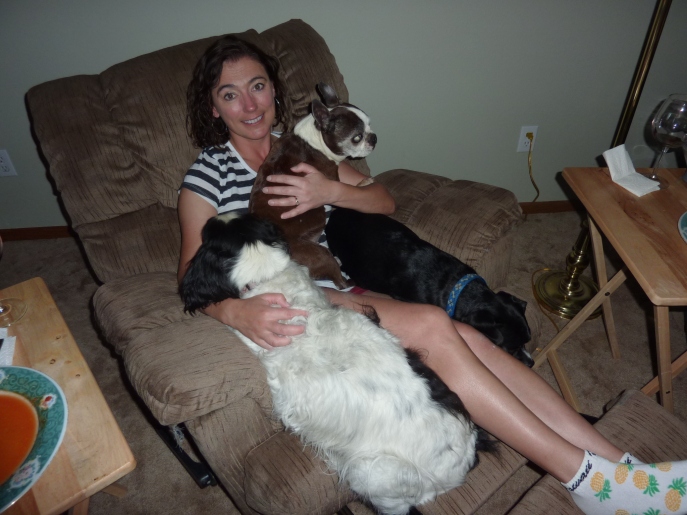 The 4 of us in Bismarck.

So I’ll shut up about my little anxieties in my perfect, love-filled, accessorized, sparkly world.

And hopefully Alistair will be back to Montana soon and maybe things will slowly get back to what our version of Normal is.

UB comforting me as Daddy kicked my butt at crib one day post-op! 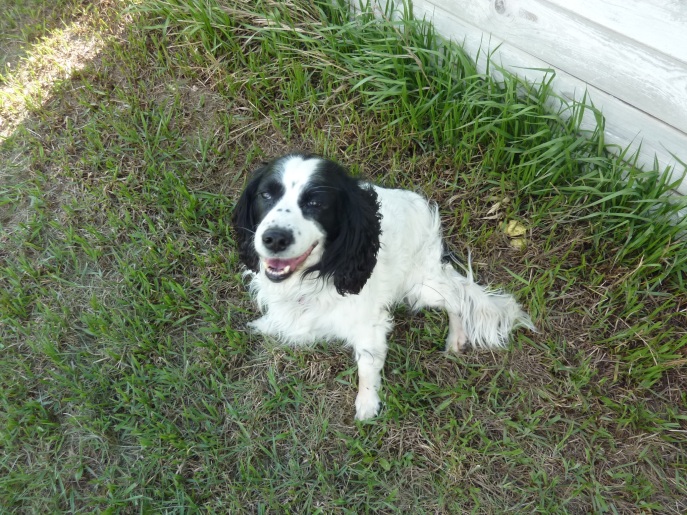 Cleo enjoying the sun in Bismarck at her old farm!

We played a round at Painted Woods before surgery and this is the closest I have EVER come to a hole-in-one!!!! Made the birdie. Ball for the wall.