My first-ever attempt at Risotto the other night!

It has already been one of “those” winters and its not even February yet.

I’m certainly not complaining, though. Alistair was here for his 2 weeks and he widened our long driveway and opened up the back so we can easily bring wood to the back deck for the wood stove. And he cleared the top of the driveway so Cleo, Jockey and I don’t have to walk in carved-out paths to get anywhere. 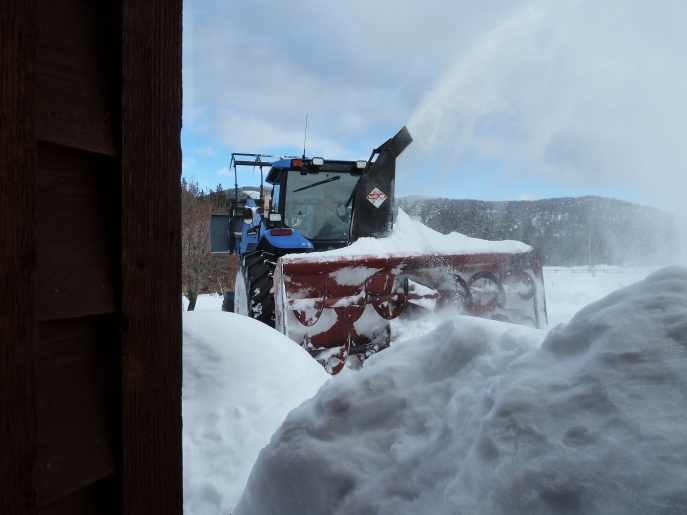 Opening up the path to the garage!

The chain on the big snowblower broke so his efforts to move snow from here to there slowed for a couple of days but he was back in business once it was repaired.

We got the vent for the dryer dug out from under a small iceberg and I don’t have to air-dry everything anymore! Within the iceberg was the shovel he forgot he’d placed there to remind us exactly where the vent was in case we got “a bit of snow.”

He found the vent! And the shovel we forgot about!

And even though I’ve had to plow with Big Red twice since he left just days ago (including this morning, thank you, Mother Nature), I really don’t mind because its not coming down like it did a month ago and I have my Hawaiian tunes to enjoy while I shove snow off to the side of the road.

I’m not minding being somewhat home-bound this winter because I have an online course I’m playing with, there has been a lot of figure skating and PGA golf on TV, I’m pretending to hit the treadmill again and there is that awesome cooking course that has lessons and classes available at all times! 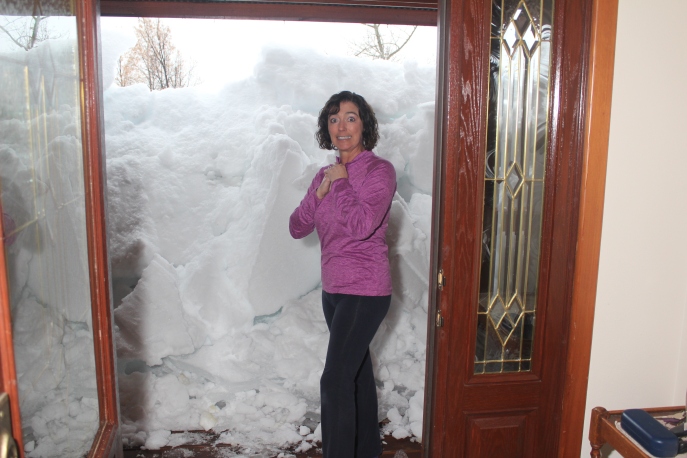 Right outside our front door…

Just last night I did a short lesson on how to store and cook with herbs. I’ve used herbs all my cooking life and we have had great success in our ND garden with them but I still learned a few things last night and I’m inspired to try a few recipes.

Just like I was inspired to finally try my hand at risotto a few nights ago. I had done 2 lessons on risotto but I wasn’t able to get the right rice in our little, local grocery store. After our monthly trek to Missoula, however, I came home with Arborio rice and was ready to go for it.

I never like to make brand-new dishes when Alistair is here, though, because our time together is limited and we make so many great dishes that we love- no point trying something on the off chance it doesn’t turn out.

And you know, it was good but it wasn’t great. I was patient and got the creamy texture that is desired but there were still a few grains that had too much bite to them. And the dried mushrooms were shiitake, not cremini like the recipe called for and I think they were a bit overpowering. It wasn’t bad, though, and it made for an alright meal.

Its not just me getting on the Rouxbe bandwagon. When Alistair was delayed in getting here thanks to the weather, he watched the lesson on making your own Hollandaise. With nice-looking salmon brought home from Missoula last week he turned on his cooking skills (with the lesson pulled up on the laptop, of course.)

He clarified his butter, I made a shallot-white-wine-vinegar-white-wine-tarragon reduction and he created the creamiest, most yummy Béarnaise I’ve ever had! 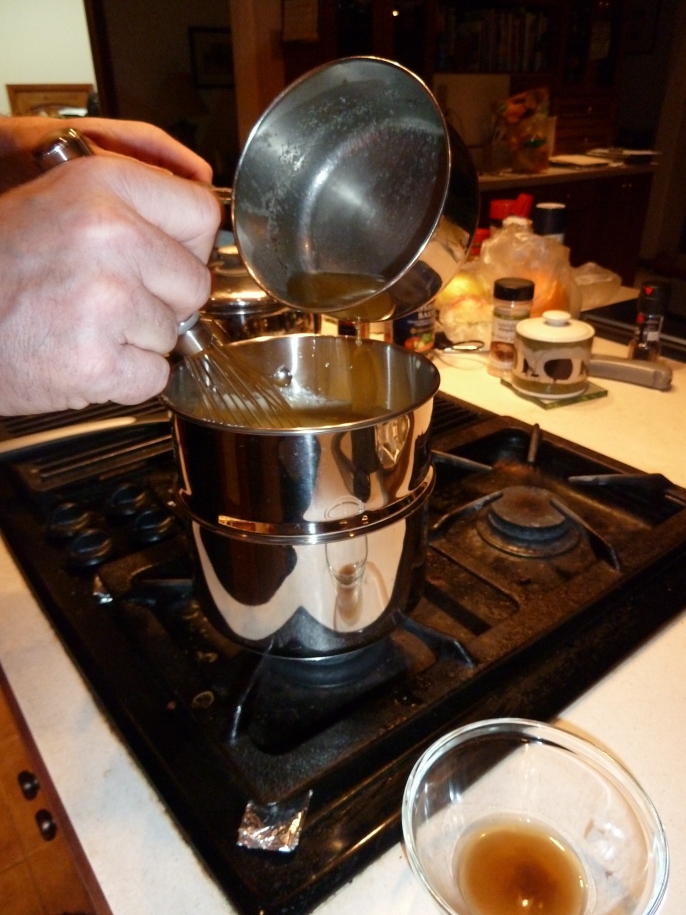 Alistair… clarifying the butter. Reduction in the bottom right dish.

Sure, it takes a lot longer than opening up a packet of Béarnaise mix and adding milk and butter and you’re glued to the stove while making it but, wow, what a difference!

And we “had” to buy the double boiler in the photo in order to clarify the butter. I’ve upgraded both of our kitchens with stainless steel pans, a new steamer, soup pots, and gobs of utensils. Not unlike when we took up golf and I  need a new wardrobe only in the case of cooking, our kitchens got the new duds. It has been worth it.

My cream of mushroom soup made from scratch was delightful and maybe even better than the cream of asparagus soup I’ve made a couple of times. The stir fry sauce with velvetted chicken had just the perfect salty kick and crunch to the veggies (oyster sauce- who knew?) The steamed salmon with lemon & dill was simple and yet something I had never tried. And the Mexican Red Rice, which I made using a real rice pilaf method (rice is cooked in a blended mixture of tomatoes, garlic, onion and broth) has been a repeat a few times already!

Not everything has been a success. The short ribs were just ‘meh’. I’ve smoked myself out with olive oil when I ran out of grapeseed. I’ve had a couple of pan sauces that went down the drain vs down the hatch. And there was one seriously undercooked chicken breast that just didn’t pan out.

But more than not, things work out and I’ve gained confidence to actually create things myself.

Like the amazing “Chicken Tanya” I created just before Alistair got back. 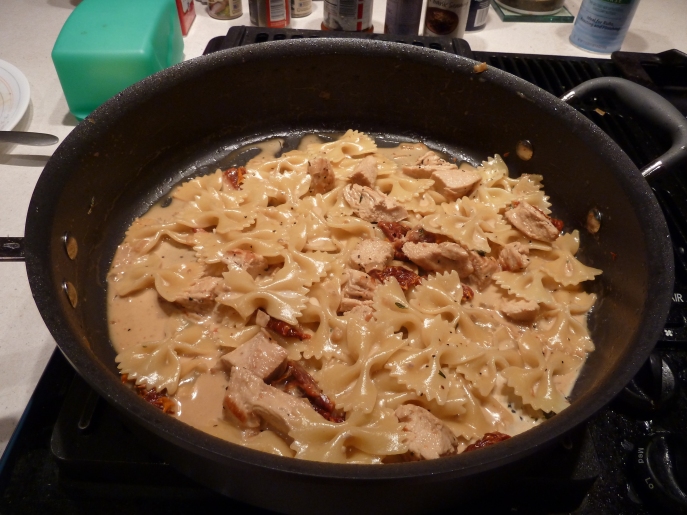 Chicken Tanya on its maiden voyage to my tummy!

I pan seared the chicken breasts and created lovely sucs. I sautéed shallots and then deglazed with white wine. I added a bit of garlic with sun-dried tomatoes & fresh thyme and reduced it all (patience is key with reductions, I have learned.) Then I added chicken broth and reduced it all before adding a touch of cream. Served over a good quality pasta, this dish was incredible. And it was all from my own head which is probably why it tasted as good as it did. 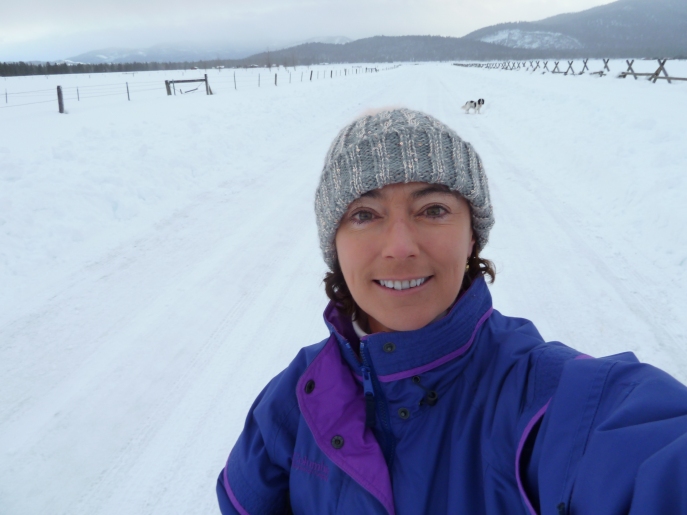 Driveway work a couple of weeks ago.

So while our house is buried in snow I’m not wallowing in lonliness out here in the middle of nowhere. I’m keeping my brain busy as well as my body even though my heart aches because we’re closing in on the one-year anniversary of losing Loki and I still can’t believe that UB is gone and 14-year old Cleo has been stumbling a bit lately and I’ve noticed more grey hairs beneath her eyes and 17 year-old Sport is thin but ever the lover.

And the Olympics are on the horizon but I’ll save my pre-Olympic skating buzz for next time.

I have chicken out for supper tonight that I’ll steam with lemon and thyme. I’ve made that one before and its quite tasty.

I’m not giving up on the risotto, either. I think I need to go to a more basic one, though, and skip the mushrooms & onions. Just work on the rice to create the creaminess all the great risottos have. Maybe with shrimp and peas.

A fun scallop & tomato concoction I created before Christmas.

There is much to look forward to in the world of Rouxbe. Home made pasta is up there. I’m holding out but almost ready for the long course on living a plant-based lifestyle. I think I need the Olympics out of the way before I begin that because it, like the course I won last year that got this whole thing going, will take me a few months to get through.

I’m keen and interested, though, so it will be great. Here’s to old dogs learning new tricks and being open to a lifetime of learning! And a never ending winter that is tailor made to cooks and chefs!

When life hands you lemons….

A neighborhood and historical tragedy. An old school house buckled under the weight of the snow this winter and finally gave way.

Plowing in a blizzardy white out a couple of days ago. Huzzah! 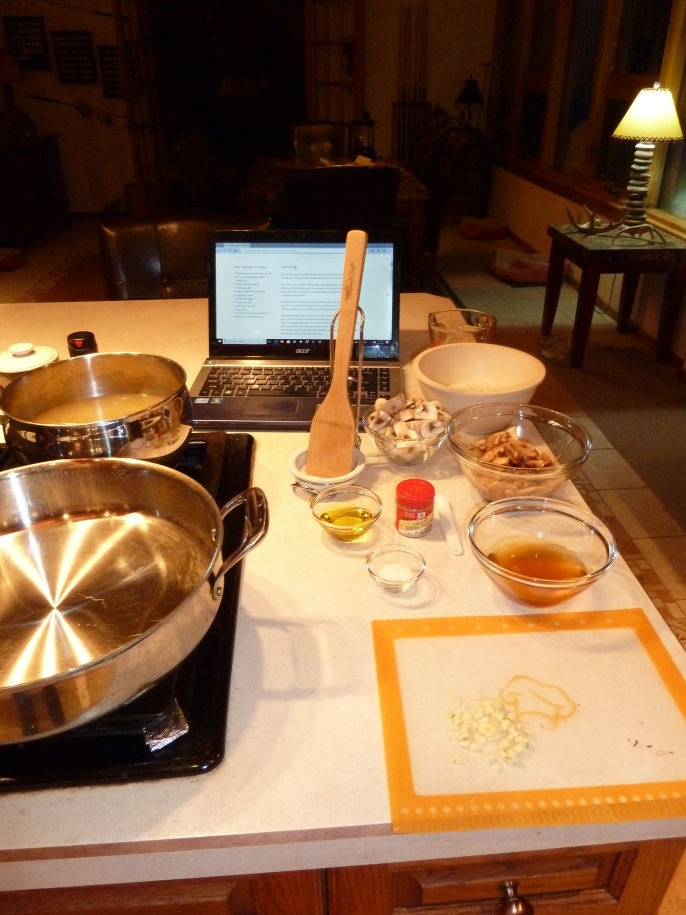 The risotto might not have been perfect but my mise en place was top notch!

4 thoughts on “A Cook’s Winter”