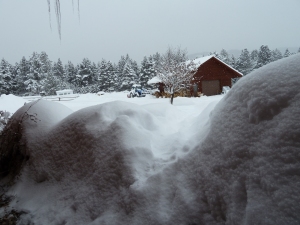 Gee, I wonder what I’ll be doing today?

The title is a line from an old U2 song.

Its an obscure song with a bit of a dark, haunted sound to it but I absolutely love it. Not that I really know what they’re talking about with some of the imagery but I get the point of running to stand still.

I’ve done this so many times in my life its not even funny. In fact, I kind of live that way.

I work my ass off doing a million-billion things (all with a perfectionist’s attitude, of course) all day or all week or all month long so that I can have that ‘ahhhh’ moment somewhere down the road.

Enjoying that ‘ahhhh’ moment at our wintery ranch

I sometimes find it difficult to completely relax when there are things that need to be done.

When you live on a ranch in the middle of nowhere with a bunch of animals there are a lot of things that aren’t negotiable.

It doesn’t matter that the snow is up to my mid-thigh this afternoon and that they are calling for another foot or 2 through tomorrow.

It doesn’t matter that I shoveled the deck yesterday and that my shoulders are a bit sore because the snow that’s laying on our already-bowed decks is heavy and it needs to come off. 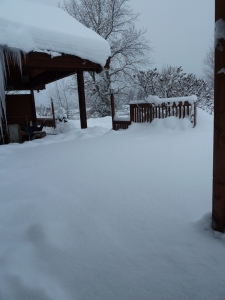 I swear, I shoveled this baby bare yesterday.

It doesn’t matter that Big Red is buried and that the controls for the blade are getting a bit finicky and that the wipers keep getting iced up and I have to stop to de-ice them and the door isn’t shutting very well and I’m only plowing today to make plowing easier for ltomorrow. 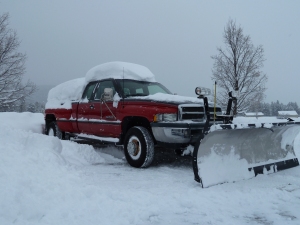 Big Red. My 1996 companion who saves my ass every winter.

I love that truck.

He got all pimped out a few years ago with a cd-player, stereo and seat covers, the blade and a fix to the power steering.

Sometimes I tune in to Jack Johnson while I plow using Big Red… just for the irony of it all.

Lately, though, its Coldplay and Mylo Xyloto.

Because this is Paradise.

One of the peaks of the Swan range just north of us.

And if I want to stand still and take some time to enjoy it, I have to work my ass off now.

Our annual friend, The Icicle as he is forming. He goes through many adaptations each winter and he’s got a good start already this year.

Horses don’t get enough water from licking snow. Yes, there are old ranchers who think that’s acceptable but our stallion, Dash is getting older and he gave us a colic scare this year already so I’d like to make sure he has ample access to water.

Or even just a little bit. 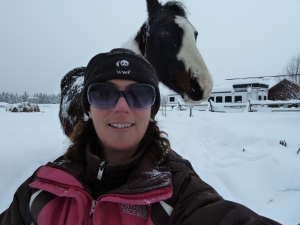 Dash, surveying my work as I take a selfie break from hacking away at the ice and snow.

I’m sure Dash appreciates my effort.

Trudging through the thigh-deep snow with a shovel and a huge mallet in my hands.

Heaving that damned mallet up in the air only to slam it back down again over and over, hoping the entire time that the ice I’m standing on doesn’t give way.

Shoveling an area for him and taking it down bit by bit so that he can actually reach the bubbling, gurgling, fresh open water.

And then feeding him about 20 shovels full of water because he still didn’t want to go to the creek.

“I think you can take some more of this snow down….”

Its just stuff that needs to be done.

All these things must be done and nobody else is going to do it if I don’t.

Unless Alistair is here- he gets a LOT done around this place. 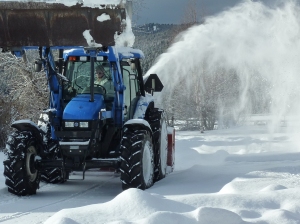 But he is in Bismarck treating the 100s of sick folks who flock to the Walk-In clinic sneezing and coughing in his face for 14 days straight.

His own version of running to stand still.

He works his own butt off so we can continue to have the wonderful life we have.

Its the good life!

So we can enjoy the Paradise we call home as well as our other favorite Paradise half-way across the Pacific Ocean now and then.

I even feel a teensy bit guilty right now taking time to write this blog when I could be splitting wood.

I have worked on that guilt. I’m sure many writers have it.

I’ve worked on believing that what I write has meaning and that its my contribution to things right now.

Along with plowing, shoveling and clearing piddle zones for blind companions. 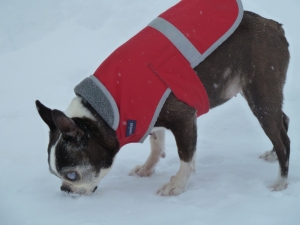 Don’t get me wrong- I’m not complaining one bit. I love the exercise and being outdoors and the fact that I truly am contributing to our greater good.

And we laugh and joke when we work outside together and I let the big dogs out and they romp and play in the snow and everything gets done and my meal tastes better and my sleep is often deeper because of the hard work.

Because I’ve been running.

Or shoveling, as it were. 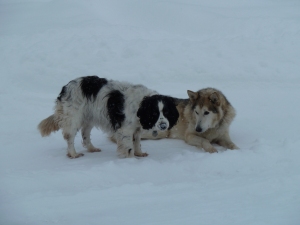 Cleo and Harry helping me shovel.

“You missed a spot over in the corner, Mummy.”