I love the seasons in Montana. 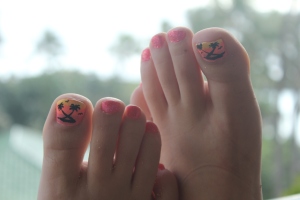 Aloha toes! You know what that means!

My annual veterinary dermatology conference was on Kauai this year which is probably our favorite of the islands.

Hawaii’s islands all have a distinct flavor or feel to them.

Maui is happening. Its hip. Its trendy. Its where tourists flock with their families and the place has a real vibe to it.

The Big Island is enormous and covered in black lava. And there’s a volcano erupting that keeps the snowbird retirees from the mainland interested. It vibrates a little slower than Maui.

View of the southern shoreline from the Grand Hyatt.

And then there is Kauai where life moves even slower.

The trade winds had stopped blowing our first couple of days there so things heated up. It was unusual to experience that and even the locals were sweating up a storm.

Getting toasty on the Poipu Bay golf course our first day!

You get used to 3-shower days because the mix of 100spf sunblock and sweat feels just like you imagine it does.

Anything that isn’t cotton attaches itself to your body like a second skin and driving around in circles in the golf cart as fast as you can to cool off makes total sense. 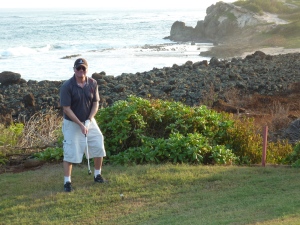 The view from the last 3 holes at Poipu Bay were spectacular.

The Poipu Bay golf course became our home-away-from-home-course. The staff were hilarious and treated us like Ohana the second time there. The course was in great shape and we were some of the only players there each day!

Our second round at Poipu Bay… views like this and the place all to ourselves!

Alistair became somewhat of a celebrity during an organized one-hour lesson for the 14 veterinarians who had signed up for the annual golf tournament.

It was a free lesson and we showed up on time (which most veterinarians have a hard time doing). Everyone else was an hour late so that gave us time to visit with head pro, Chad. (Chad had been stationed in Great Falls years ago and remembers being cold for 10/12 months.)

Chad asked for a volunteer to try using his directional tools that he’d set up and Alistair went for it.

The rest is history.

Cart crew hamming it up with Alistair with his busted Driver head.

Chad: “I’ve never in my life witnessed anyone shear their Driver head off and send it flying like that.”

They leant us a Driver for the tournament the next day.

The tournament was great for Alistair and Dr.Rich and his son-in-law, Danny but it was a complete bust for me.

Golf cart parade heading out to tee off for the tournament!

I don’t even know why I’m admitting this because I’m usually pretty competitive with myself but I totally sucked that day.

My only real saving grace was my drive on a par 3 that landed a few inches from the hole. Our only birdie. 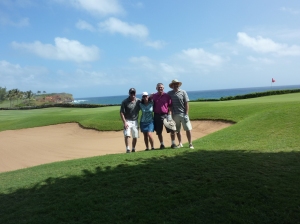 Our foursome, Alistair, me, Rich & Danny

Our team still laughed a lot and I played great golf every other time Alistair and I went out so I’m not worried. Embarrassed, perhaps, but not concerned.

We did so many more things than just play golf, though.

We got to hang out with Alistair’s daughter, Whitney and her husband, Lau and we met his fun parents, too. The kids made a great BBQ for us at their place and we all laughed and relaxed and told stories about our adventures in life. 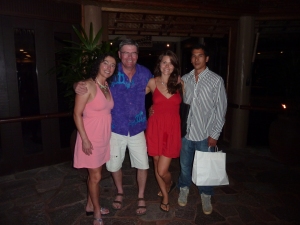 Me, Alistair, Whitney & Lau at Tidepool’s restaurant. This was when the trade winds weren’t blowing and we were as warm as we look here.

The kids met us for Smith’s Luau, which is a well-known place and show. Its also where the famous Fern Grotto boat tours take off from. 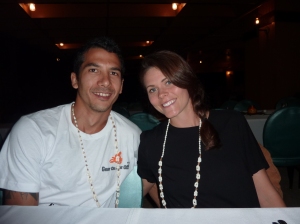 Lau and Whitney with us at Smith’s

The food was terrific and the stage for the show was beautiful under the starlit night. The performance was pretty good but if you’re going to jeer the crowd and tell us we need to clap more and you’re the fire thrower-guy, you maybe should practice tossing and actually catching those things a bit more. 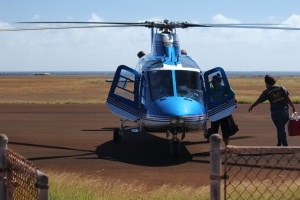 Ready to load up for our incredible adventure!

Our biggest adventure this trip was an afternoon jaunt over to the remote island of Ni’ihau, where non-Hawaiians are not allowed to go.

Or you charter the helicopter owned by the Robinsons, who own the island.

Whitney, Lau, Lau’s mom, Fredlyn and our new best friend, Tony from Ohio joined Alistair & I on a twin-engine bird that was over 30 years old.

Lau and Fredlyn just before the flight!

Our pilot, Dana was incredibly knowledgeable and gave us a superb aerial tour of the island before setting us down on our secluded, gorgeous, sandy beach where we spent the afternoon.

There is so much I could say about this trip but then the words fail me. It was beautiful. It was a privilege. It was Ni’ihau. 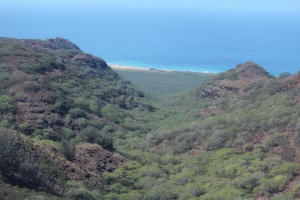 more of our aerial tour

No fishermen that day. Some of the villagers ride a horse for 2 hours just to get to the shore to fish.

Our beach for the afternoon.

We snorkeled, we relaxed, we hunted for shells (which we were allowed to bring back), we pontificated, we watched a monk seal sunbathe, we beach combed and we admired the beautiful land on the traditional island that a few hundred pairs of feet get to walk on each year.

Snorkeling off Ni’ihau! It was like living in a giant saltwater aquarium!

I’m sure it was different for each of us. Particularly Lau, whose stomach didn’t enjoy Dana’s showboating in the helicopter on our way there. ‘Nuff said.

Trade winds came back! Southern shores off the Sheraton.

Then it was back to reality (which is unreal on Kauai) and a few more conference days for Alistair.

We dined at Dondero’s, Tidepools, Merriman’s, Keoki’s, Duke’s, Rum Fire, Red Salt, Ilima Terrace, Lava’s and the Plantation Gardens. We highly recommend a stroll through their amazing gardens even if you don’t eat there.

“Fraggle” plants at the gardens.

orchids at the gardens

We managed golf at the former Kauai Lagoons, (now Hokuala, which means Rising Star) where the airplanes landed immediately adjacent to a couple of holes on the back 9 and the term, Jungle Golf took on a whole new meaning.

One of our trips through the jungle at Hokuala! 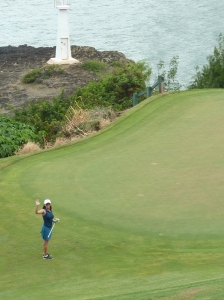 Hokuala’s signature hole with a cruise ship docked at Nawiliwili in the background. None of our balls went swimming!

We had one more round at Poipu Bay where our Ohana treated us well and before long we were dining at Duke’s and then killing time waiting for our night flight out of Lihue.

We are rejuvenated and relaxed and tanned and ready for winter. The wood stove is on and the first few inches of snow in Montana has already melted. Loki had another seizure the day after we returned so I’m keeping her close. We still walk & talk, though, and she did a once-around the entire house & yard yesterday.

We love our Aloha adventures but we love to come home, too. Mahalo for reading, and it was great to see Aimee, Richard and Bruce and of course Whitney and Lau and meet his cool parents, David and Fredlyn. Aloha. Until next time. 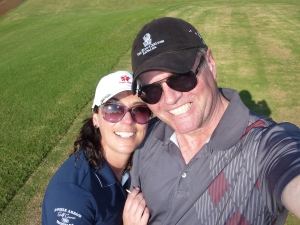 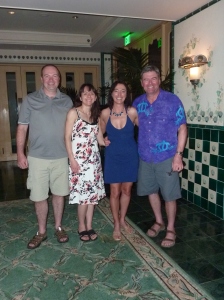 Fun supper at Dondero’s with one of my veterinary classmates, Aimee and her boyfriend, Jason! 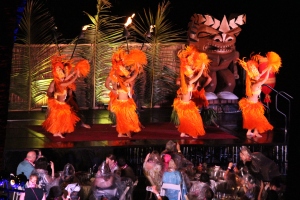 the Sheraton luau dancers as seen from our walkway

Final golf of the journey, once more at Poipu Bay, hours before we had to fly home.