Alistair had an extended work period last month and I was missing him.

So were Loki, Cleo and UB so the 4 of us loaded up into the Jetta and we were back on the long, lonely Highway 200 heading East yet again.

I only brought the necessities.

Dogs, golf clubs and bling. UB and Cleo were being camera shy.

When I reach pavement and toss a quick wave at Jessi’s house in Ovando, we are really on the road.

Its a pretty time of year for the drive because everything is green and baby animals are all over the place. Its as if the planet is full of hope and renewal.

The last of the mountains.

Calves, foals, fawns, and lambs hang out in their herds and mosey towards the creeks and streams that weave their way through vast acreages. Where one dirt driveway pierces a perfect fenceline and I won’t see another for several miles.

There was hay on the ground. Lots of it!

Big, round hay bales on the ground already.

Round hay bales dotted the landscape on both sides of the road while other farmers were in the process of cutting or baling.

More hay along the road.

The long drive isn’t for everyone, especially with canine companions but I really don’t mind it with the weather being so nice and my buddies being so cute.

Well, at the rest stop when UB and Cleo get tangled up in their leashes, my legs and each other it isn’t so much cute as it is comedic. And silly.

But I can’t blame the dogs for their lack of leash-etiquette. I just laugh out loud and hover over blind little Loki and I giggle as they all sniff the prairie air and I encourage them to drink the water I’ve poured.

Getting closer to North Dakota

The trip is enjoyable with satellite radio. What a change from driving in the 80s and 90s! When you had to load up your box of cassette tapes in their rectangular cases and push buttons to buzz through songs you maybe didn’t like, hopefully not going too far into the next song.

When your other option was the radio but good luck getting much more than AM or CBC Radio driving out in the empty prairies.

I lucked out in that there was some good golf happening on the PGA station and the music stations I like had some great playlists going on.

I love the Pulse. I get introduced to new music and sounds from artists I may or may not have heard of and I’m generally impressed.

And I enjoy the Blend because they play some older tunes mixed in with the new music and its usually a good mix.

I let my thoughts run wild, though, listening to the generational stations, 70s on 7, 80s on 8 and 90s on 9. The sounds of those decades were influenced by so many different things facing the world than what’s going on right now.

I’m a product of the 70s and along with ballet and figure skating I also took Disco dancing lessons (“do the hustle!”) Disco tunes merged somehow with rock & roll which both blended with soul-searching ballads and songs about finding ourselves. Our parents plugged the 8-tracks into the car with a thunk and Boney M or Harry Belafonte sang about trippy night flights to Venus or meeting a little girl in Kingston town.

Those of us non-millennial types somewhere in our 40s now were weaned on Cat Stevens, Stevie Wonder and Fleetwood Mac.

And I think people were happy back then and they took responsibility for their actions and women and different ethnic groups were finding their voices and getting their feet underneath them on firm footing that hadn’t existed before.

And there was no social media or instant news access. We read newspapers and encyclopedias and we wrote letters and had pen pals in different countries and fondue was cool because people could visit while they ate instead of bending over hand-held phones that controlled their lives, offering images of irate and irrational wanna-be leaders next to advertisements for legal groups telling you who you should sue next. I liked the 70s.

Skater Girl of the 80s

And I lived through the 80s which produced some of the most unique sounds of any musical generation. The Euro-pop scene exploded, men wore make up and full drag, all while Heavy Metal began its loud, frenzied march through many adolescent’s “ghetto blasters.”

I remember my own mom ripping an Iron Maiden or Quiet Riot poster off my brother’s wall but I can’t remember why.

The 80s music scene is chock full of experimentation with synthesizers and lip synching (Girl, you know its true!) and suddenly we had MTV and Much Music and stories behind songs became as important as how it all sounded. 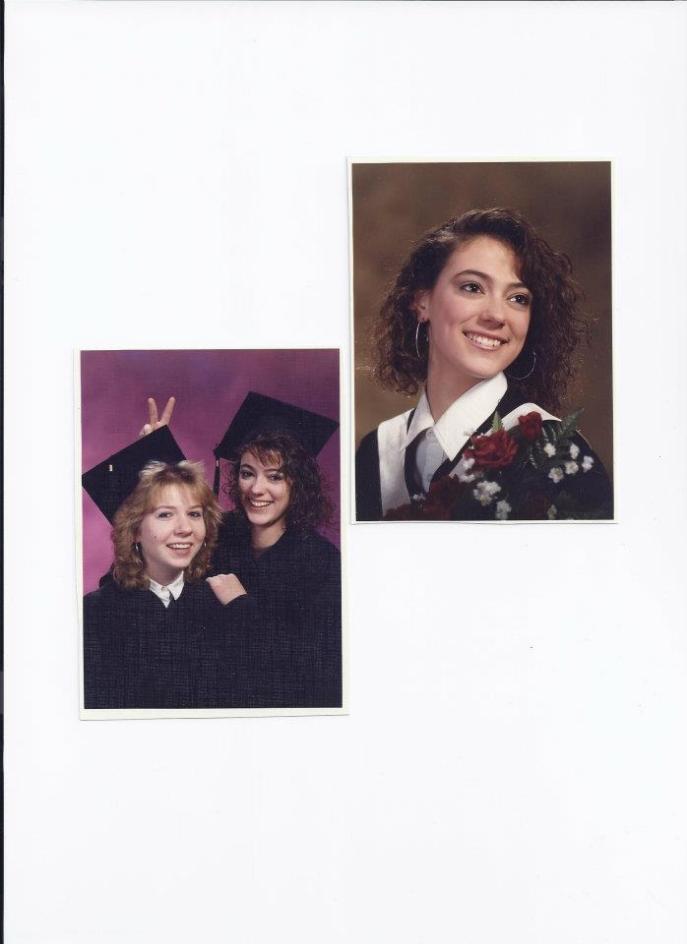 The music reflected the times. HIV and AIDS were real. Hunger existed around the world.

People responded and even though a lot of songs came out of the 80s that make me shake my head it was a reflection of people asking themselves and others what could be done? How far could they push the scene? What kind of world did we want to live in?

Yay for Boy George, the Beastie Boys and Duran Duran. Yay for Bruce Springstein and Cher. And yay for heavy metal, which is a sound and a vehicle for people (and possibly their rage) that has survived to this day.

Japanese metal in the early 90s

My life in the 90s was as busy and confusing as the musical scene which was all about asking questions and trying to keep up with the World Wide Web and what that meant. We began 1990 without the Berlin Wall and the 90s saw African Americans beginning the identification of their own culture and what they would (and wouldn’t) stand for.

The 90s is where rap music took off and while Vanilla Ice certainly had his hey dey in there it was looked at as a mostly black style of music. Rap music was another way to interpret and question life, and it provided yet another glimpse into a song’s meaning, just like the videos behind the sounds did.

Globalization began to happen on a larger scale. Home grown nutjobs became terrorists with Oklahoma City. Flannel and plaid became cool. DVDs replaced cassette tapes. Peaceful protests of the 60s and 70s were replaced by riots in LA after the Rodney King verdict. And nobody can forget where they were when they were watching that white Bronco. 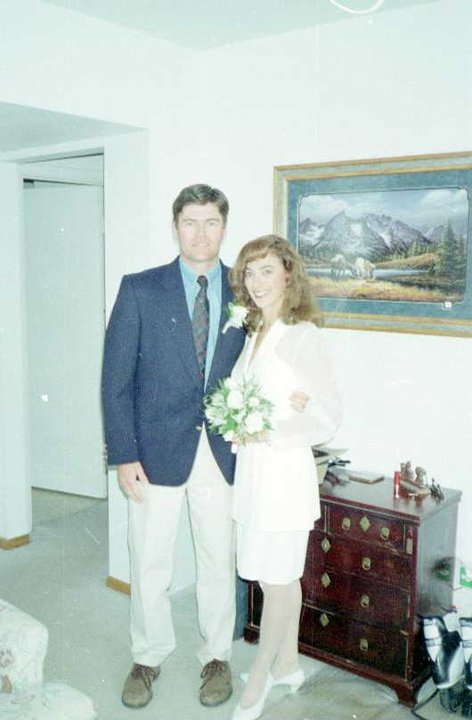 One of the things I became in the 90s!

I lived in 3 countries. I graduated both college and university. I was a showgirl, a skating coach, an English Teacher and a waitress. I became engaged then un-engaged. Then I got engaged and married to the right guy. I was a pet parent and a step parent for the first time and I attended a bunch of awesome concerts.

As always, a musical soundtrack has played in my head through every step of every adventure and these 3 generational satellite radio stations brought it home to me during my 11 hours in the car with the dogs.

I am glad I had parents who enjoyed music and that, through figure skating, I was surrounded by different sounds much of my life.

I love that Alistair shares a passion for music and that he likes playing his guitar and singing John Denver or Garnet Rogers songs to me. An ABBA record on his shelf was just the beginning for us over 20 years ago.

And I am lucky I can load up my dogs, deaf or blind as they may be, and we can travel the open road between 2 states and 2 homes in vastly different surroundings.

That I am free to listen to my life’s soundtrack and pontificate on the meaning of it all and what the generational sounds will be from 2016. What will I reflect back on listening to Ed Sheerhan, Taylor Swift, Coldplay, Maroon 5 and Rixton down the road?

I’d love to hear the sounds of your own soundtracks regardless of where you live or how old you are. Until next time… sing on. 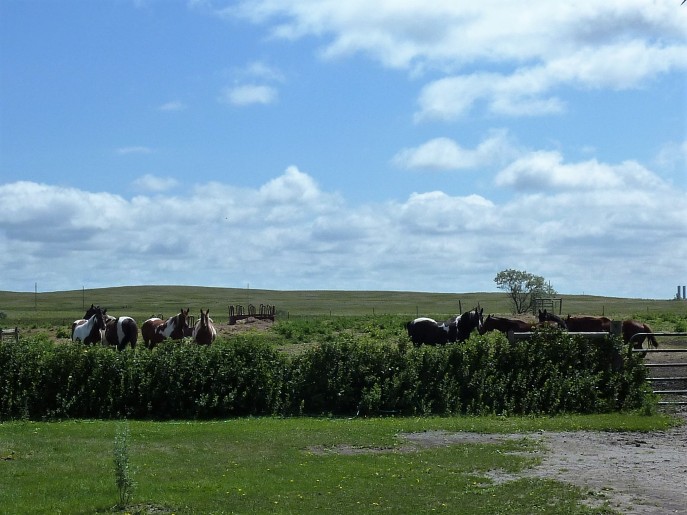 Our happy herd in sunny Bismarck

UB’s 2nd bath in 2 trips to ND. We aren’t sure what he’s found but it stinks!

Round 2 for the robins. Same nest, new babies!

Trying to beat the storm clouds as I drove back to Montana.