One week ago little Boomer took her last nap next to me before I helped her across the good old Rainbow Bridge. 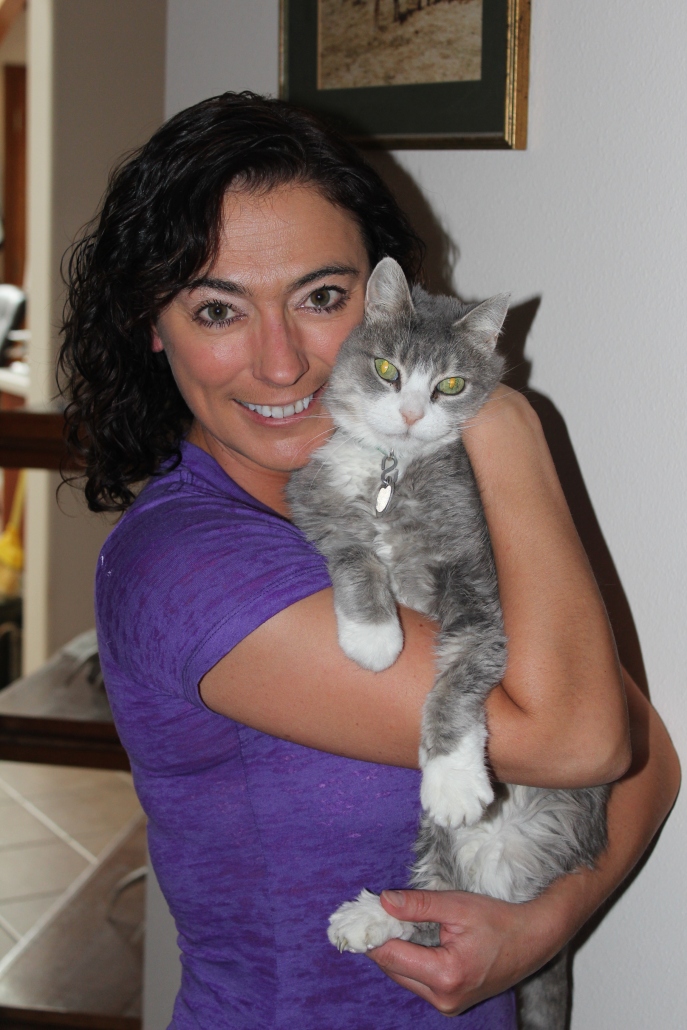 Mummy & Boom, just a couple of years ago

She was the subject of one of my very first blogs two years ago when I was having difficulty managing her hyperthyroidism and kidney failure but we found the right mix of meds and she had a good run for most of that time.

Little Boomer a couple of months ago.

She had lost some weight and was becoming dehydrated (typical with older feline kidneys) so we started adding ice cubes to the water dish to encourage drinking. Most veterinarians will suggest the ice cube thing for older kitties. Cats are curious to the core and if they play with the cubes in the water to watch them  move or to hear them tinkle they usually end up drinking more, if not at least licking off their wet paws. Looking back, we had just lost her brother, Oscar and perhaps depression played a role in her health as well.

The ice cubes became an addiction for Boomer. When we would first get to the kitchen in the mornings we were meowed at for the ice cubes.

When it was close to supper time-ish, more meows.

The meows got louder and more demanding the more time passed but it was just one of those quirks we put up with because she was Boomer. And she was old and possibly starting to lose her marbles the past couple of months but still, the ice cubes weren’t a big deal.

We made little accommodations for our aging buddy because she had been a great cat for many years and it was easy to do.

Lots of expensive canned food to crush the pills in. More beds to lay around the house in. Watching wherever Loki went in hopes we could prevent her bonking into Boomer and possibly getting her eyes scratched (again). Combing her hair matts out when she reduced her personal grooming (and being watchful of those claws!)

We did these things and more and Boomer just kept ticking along, prancing into the hallway bathroom where the guinea pigs used to be and leaping up onto our bed for bacon in the mornings.

Until a few things changed…

She started to develop a weakness in her legs. If we would reach down for a good head rub it would almost knock her over. More vocalization, and louder. Incessant sometimes with an almost frustrated-sound to it. Even less grooming and even more sleeping and, a few weeks ago, dragging her back feet at night.

We shared glances at each other when she would just about topple over and we fed her treats on demand and her pills twice a day and she lost a bit more weight and became a lot more scruffy-looking and less tolerant and I had a long, teary chat with Boom-Boom and sometimes I had to check if she was still breathing and we had inner discussions and eventually out-loud conversations.

Which was when we decided it was Time.

Making the decision to end a long, good life is heavy. We agreed to do it last Saturday but we both avoided the topic, instead giving her little bits of chicken I cooked that night and suddenly it was Sunday. And we are health care providers who truly knew it was Time even though she didn’t have a terminal disease. Its not as if she was dying.

But she wasn’t really living, either. 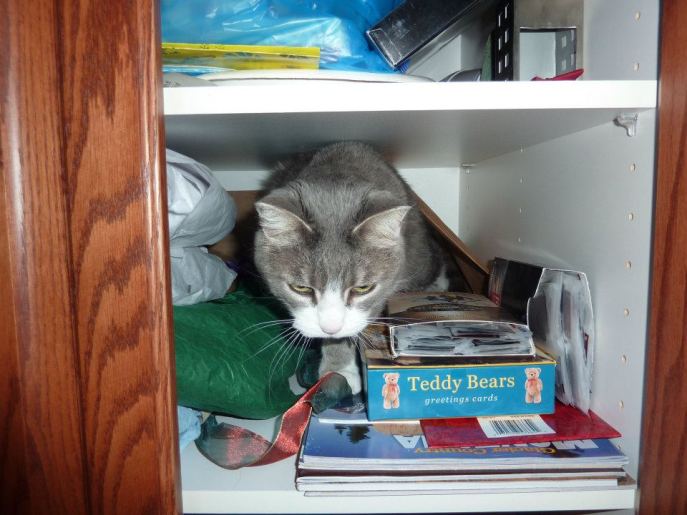 Boomer never missed a chance to get into an open cupboard!

I wonder how heavy that decision is for bad people.

For people who make plans to end a person’s life. To separate the body from the soul for all of eternity, leaving a lifeless vessel behind. To stop the incredible machine that is the cardiovascular system from working its tremendous pump that keeps a body’s life force flowing.

I wonder if they struggle with the choice. Do they rationalize their way out of it for a week or two? Or do they plan to do it Saturday and then before long its already Sunday?

I appreciate that bad people who do horrible things like that have their wiring mixed up or they are under some sort of influence that they can’t control.

Or they are immune to the weight because of the volume of times they have made that choice.

Cooper, Boomer & Oscar a couple of years ago.

In our case, for all the right reasons, we sedated our 20 year old room-mate together and she quickly snuggled in next to me, resting her head on my leg as her last conscious act. Through tears and remarkably leathery skin I found the forearm vein that Alistair helped me hold off and just like that I stopped her heart and she looked at peace.

Saying goodbye to Boomer wasn’t necessarily easier than poor Mouse, who was young and healthy until he was suddenly gravely ill. It wasn’t easier than having to rush to Harry’s side by myself when his splenic tumor terminally ruptured. None of these has been easy. It will never be easy.

Boom and Coopie last spring. Not even bothering to pretend like they shouldn’t have been on the kitchen table. At least Boom’s reading material is acceptable.

But I can accept Boomer’s death more readily because she’s been on The List for 2 years and also because Alistair was with me and we made this decision together. For Boom.

And just like that we have 2 indoor cats and 2 barn kitties.

And there will be more changes in the weeks ahead because Calypso was diagnosed with his own cancer in November and each day truly is a gift. 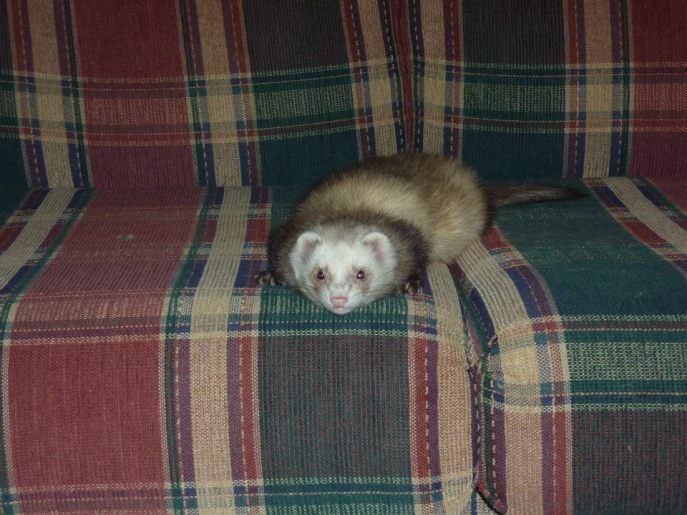 He continues to romp and play and eat like a fiend and steal Loki’s kibbles and Alistair’s boot insoles so his story is for another time.

I miss seeing Boomer in any of the beds scattered throughout the house and in a funny way I miss her caterwauling at me to add ice cubes to the water dish. I sometimes reach for her pills, forgetting there is nobody to give them to and I smile.

Her spirit is likely curled up somewhere with Cooper and Oscar and she isn’t dragging her little white feet and her eyes are bright and her haircoat is glorious once again. She’s grooming, prancing and enjoying a good sunbeam and although my heart is sad its kind of happy, too.

Oscar & Boom….together from the womb for 18 years now reunited.

Just another day for Cooper, Boomer and Oscy 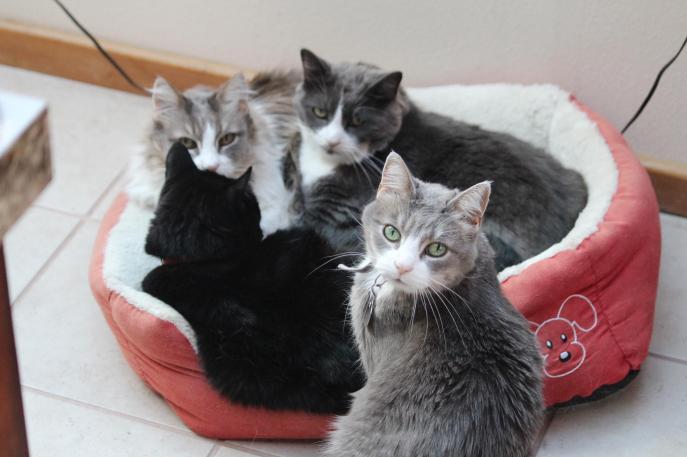 Love the look on Boomer’s face…”Seriously, you guys?”

A young Gareth and young Boomer… these 2 were pretty tight.

The 1-year old kitties with Alistair when we lived in Creston, BC. They had just transitioned to “inside” cats. 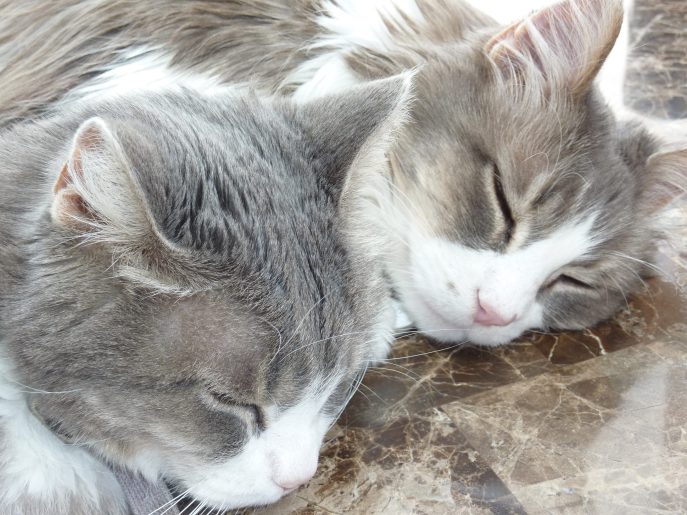