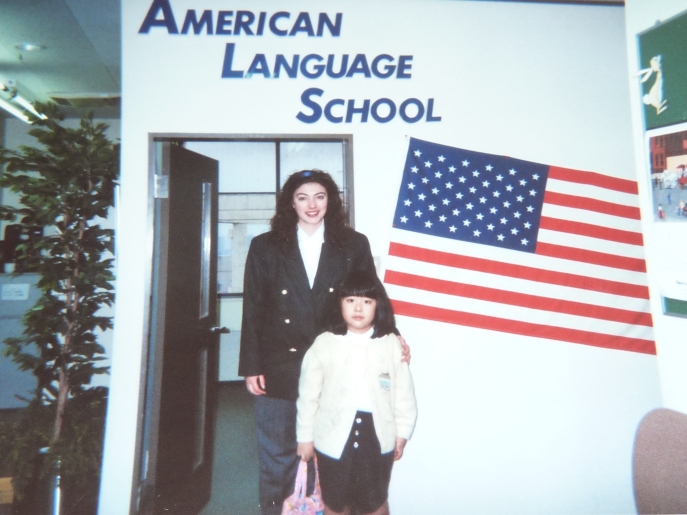 Someone once told me if you went traveling the world and you came home with money you did it wrong.

He clearly didn’t know me.

Or the Me of back then.

An independent, confidant, somewhat-naïve and uptight young woman who didn’t want to worry about money during the rest of her well-planned future. 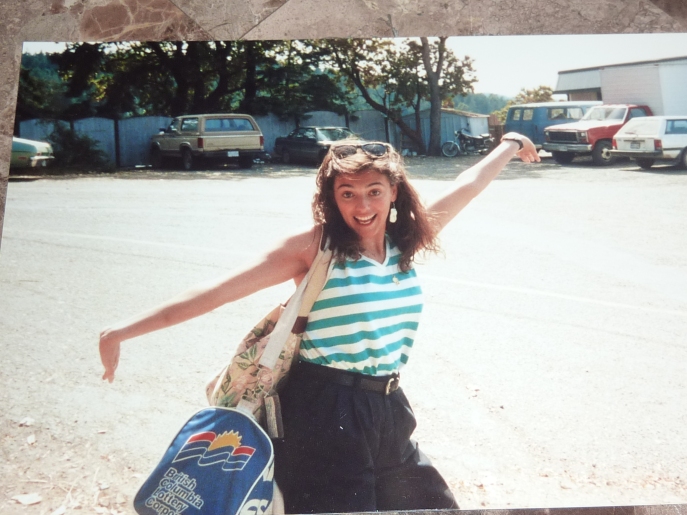 Summer of 1992… okay, some of Me is still here now. You can’t take the Crazy out of someone.

I grew up hearing about money my entire life. I knew the value of a dollar and waitressed and coached figure skating so I could cover rent, tuition, car expenses and food.

I shared a one-bedroom apartment with a girl and we lived as cheaply as we could but I knew I wanted more out of life.

My fiancé was 20 thousand dollars in debt and I wasn’t about to marry into that. I knew we needed to make some money if we were going to have any type of chance in the world. 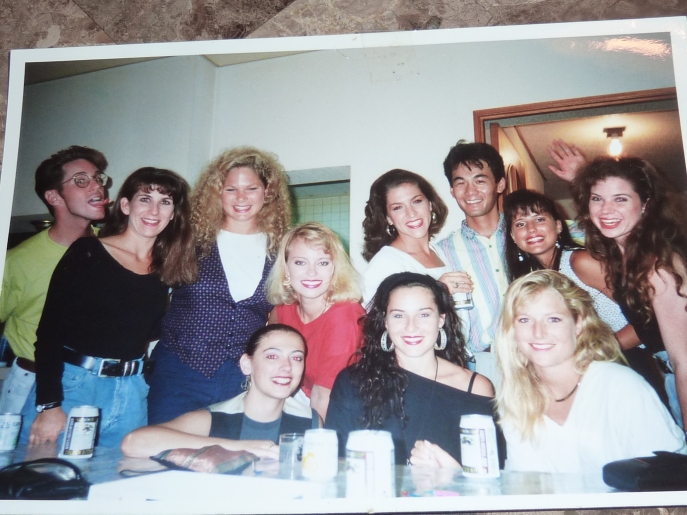 My castmates & I going out one night during my first show in southern Japan.

So I stopped school. I always knew I would return but it would be when I could afford it without having to work at the same time.

I took advantage of a good friend’s offer and packed up and joined the cast of American Ice Show at Mitsui Greenland in southern Japan.

At the time, 2 of my first cousins were living and working in Tokyo as English teachers and were doing financially quite well. 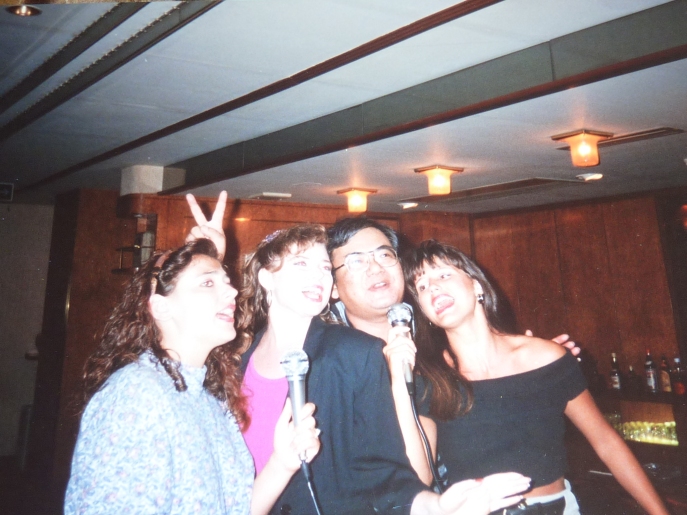 Embracing all that Japan has to offer! Showgirls and the owner of the bar… likely doing some John Denver or Neil Diamond…

I liked Japan from what I learned during the ice show and my cousin offered a room until I could get on my own feet so I went for it.

I flew to Tokyo on my 19th birthday in 1992 and began perusing the English newspapers and pounding the pavement looking for work. 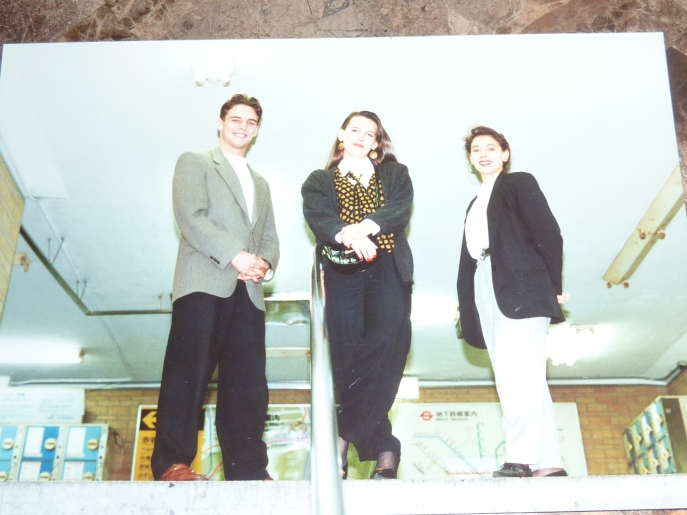 My beautiful cousins, Jeff & Joanne and I at a train station in Tokyo soon after I first arrived.

My cousins helped immensely, especially without having to worry about a place to stay right off the bat and they helped guide me as to how I should portray myself.

Namely, as a 26 year old with a full teaching degree from the University of Vancouver (which doesn’t exist). I’m sure nowadays you can’t get away with that sort of thing but the Internet wasn’t available and I was keen enough to make sure I was convincing.

I phoned, I faxed resumes, I went for interviews with my briefcase, I carried maps, I got lost, I bumped into people, I got somewhat used to cramming onto a train with my body touching other bodies, I learned Shinjuku and Shibuya stations, I got lost some more but I just kept at it.

Within a couple of weeks I was working at Harmony Schools, 2 train rides from my cousin’s condo in Kami-Kitazawa.

It was a new start-up by a young man named Randy who was born in the states but had Japanese heritage. I liked Randy and I liked his ambition and I enjoyed the school. 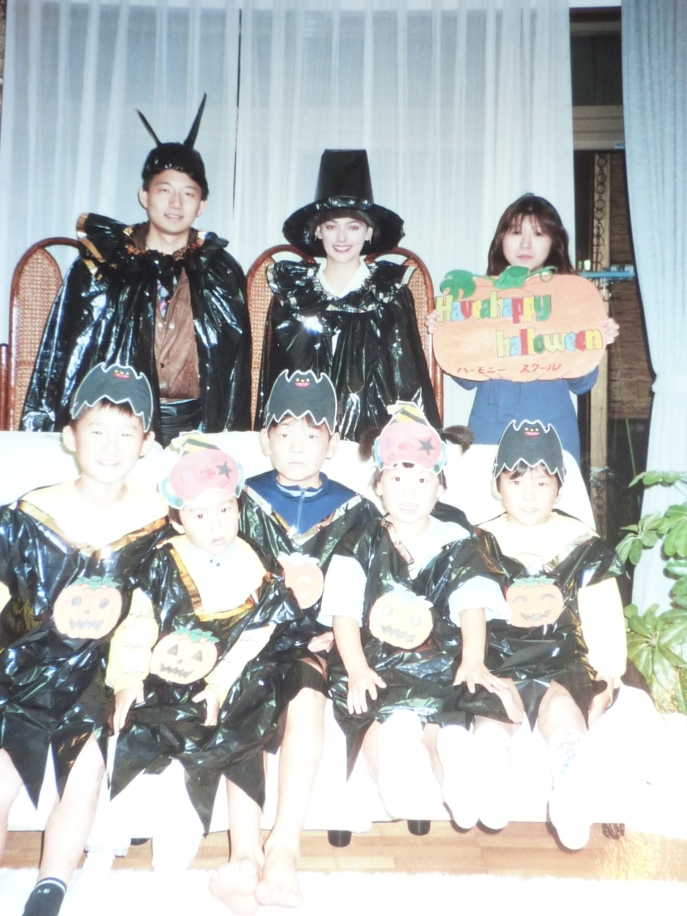 Randy, myself and his girlfriend celebrating Halowe’en with Harmony Schools!

I liked the kids and I liked them covering my train pass but it wasn’t a full time gig. I wasn’t making enough yen to move out on my own.

I continued to pound the pavement and finally nailed a head teaching position with American Language Schools in Chiba (the “country”), which was 2 hours by train south of Tokyo.

The job was perfect! They had their own curriculum and textbooks, regular training with colleagues, several schools throughout the country and my own apartment within walking distance of my school! 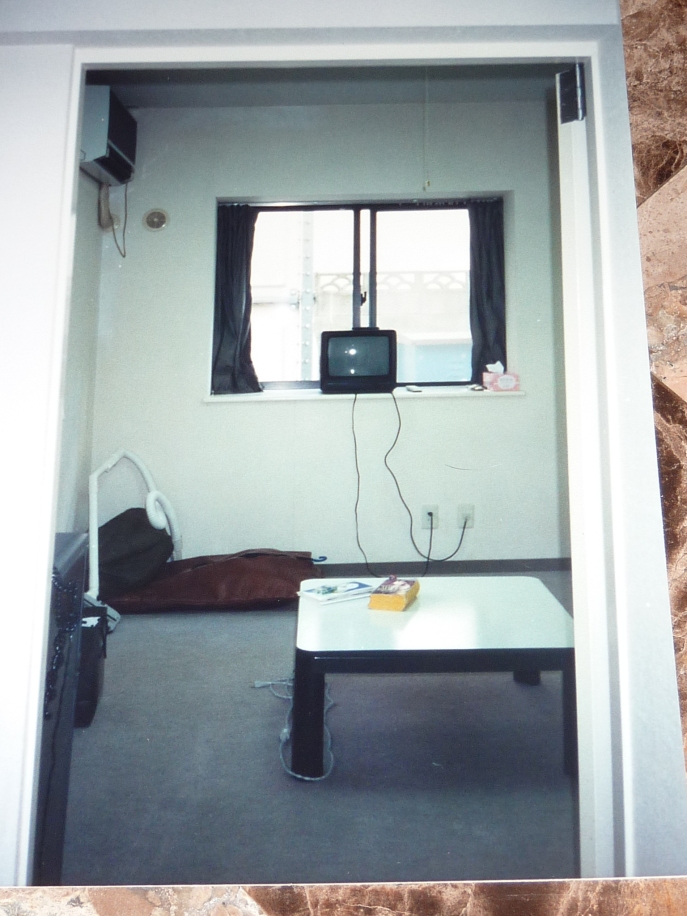 My apartment as seen from the kitchen/bathroom/entrance/hallway area.

Now, don’t get too excited. We aren’t talking fancy schmancy or anything. I was lucky enough to have a Western toilet, at least, and a TV.

Not that there were any English channels.

And not that I could follow any of the bizarre Japanese reality-type of game shows.

But I had a kotatsu table and a single futon and eventually got a wardrobe to hang my clothes in. 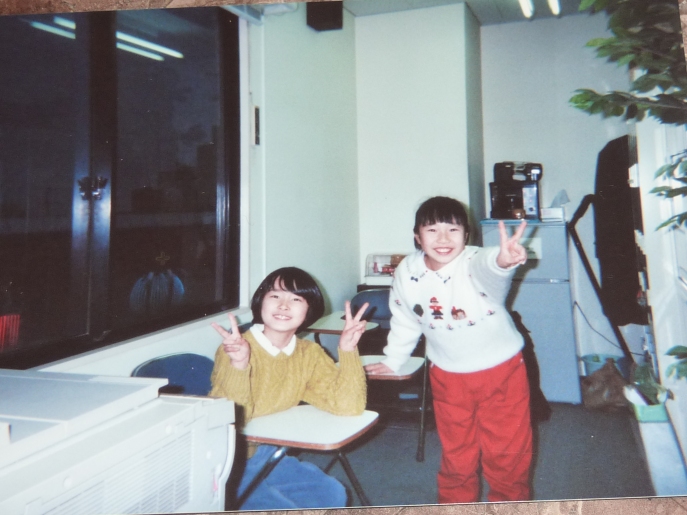 Runa (perhaps it was Luna… to this day I don’t know) and Akiko!

And I had my school! My very own school!

And I worked 6 days a week and I dressed like a business-woman and I carried that briefcase and I wrote a letter every single day to my fiancé and I met coworkers and we had a lovely receptionist and I liked my boss so much and I learned a lot about what kids went through living in the highly competitive Japanese world of the early 90s. 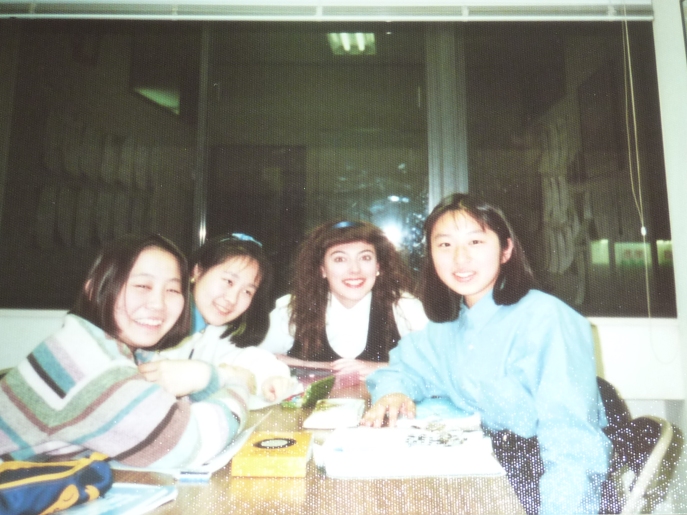 Very stressed young women trying their hardest to get into the top universities in order to be successful in life. After a few months they began to smile but they always had dark circles under their eyes. Rena, in stripes, sometimes talked about suicide.

I had a class of 3 very intelligent young women whose families paid top yen to have them be conversational in English so they could get into the best universities.

Image was everything and your family was seen as successful if your kid got into the best school. Even if she was just a girl. 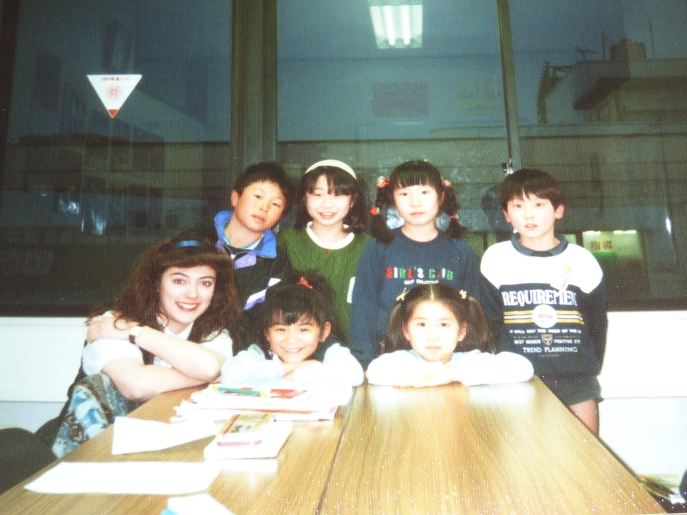 A more relaxed class of youngsters with their geigin teacher, Tan’iya-san.

I had 2 2-year olds I played with for an hour once a week just so the children heard spoken English at that age. Even my boss, Jun thought that was a bit much but she understood it.

Jun, herself was an incredible woman. A business owner! A woman! She owned 3 ALS schools and although she didn’t speak English very well she appreciated how that limited her in life. Jun was married but I never met her husband and she didn’t talk about him unless asked.

They all knew I was engaged because I talked about it frequently and everyone knew I wrote letters home to him every day. 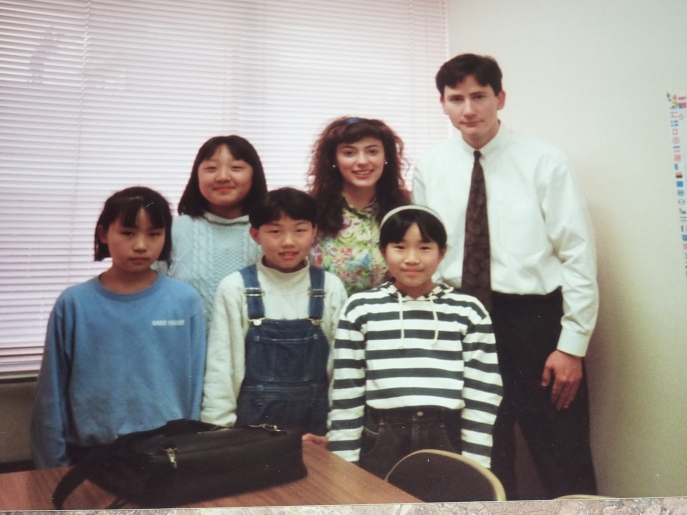 My colleague, Will, visiting our school one afternoon.

Jun encouraged her teachers to hang out so Will and Charles became very good friends of mine.

Charles was there to see the world and make some money. He visited Thailand when we were there, drank wine and was a fun influence on me. 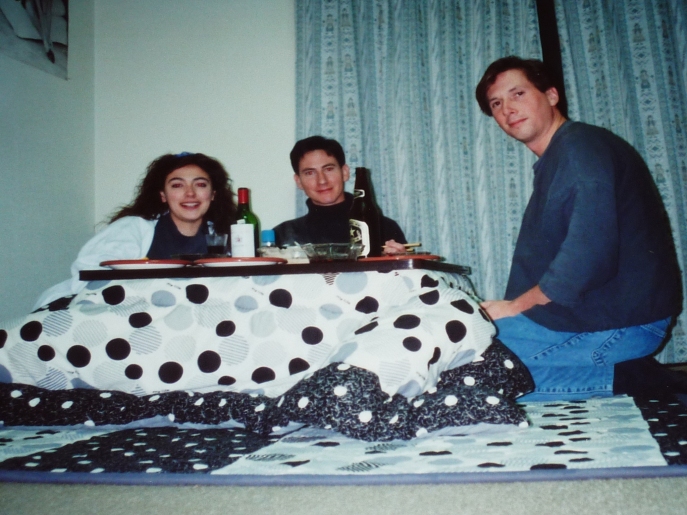 Enjoying supper with the boys… I think it was Chuck’s place and his Kotatsu. There is a heater under the table. Brilliant!

Will was pretty uptight and had some anti-American angst and was extremely sarcastic. He is probably still teaching with ALS.

But they were my friends and the 3 of us had some good times together. 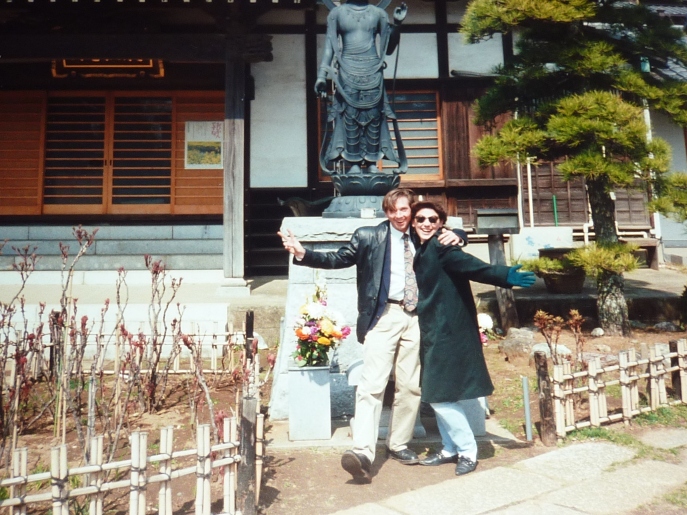 Charles & I. The boys actually got me out to do some sight seeing one rare afternoon.

And I taught and I wrote letters home and I wrote in my journal and I read all about teaching and I memorized my REM and James Taylor cassette tapes and I tried not to think about the fact I had no idea what I was buying at the grocery store and I ate a lot of donuts and drank a lot of coffee and I tried to get used to the earthquakes and I avoided eyes with my Yakuza neighbors (who were probably more scared of the little independent white girl with big round eyes than I was of them, pinkies missing and all) and I lived like that for months. 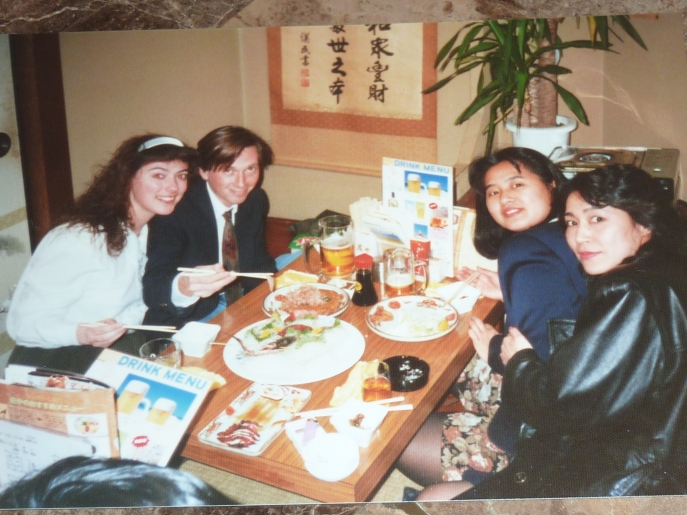 Jun, in the navy blazer often took her teachers out. Charles and I were the lucky ones this night.

I look back at my chubby cheeks smiling away and I know that I was happy. I was doing what I wanted to be doing and I was making the money I was there to make.

But I missed a lot, too.

I could have gone to Thailand with Chuck, it was a cheap enough flight for the weekend.

I could have gone to more events with young, male students who wanted to practice conversational English in a public setting.

And I could have tried to find parks to walk around in instead of dreary train stations or paid for cable so I could listen to someone speak English now and then (Top Gun in Japanese was hysterical, though!) 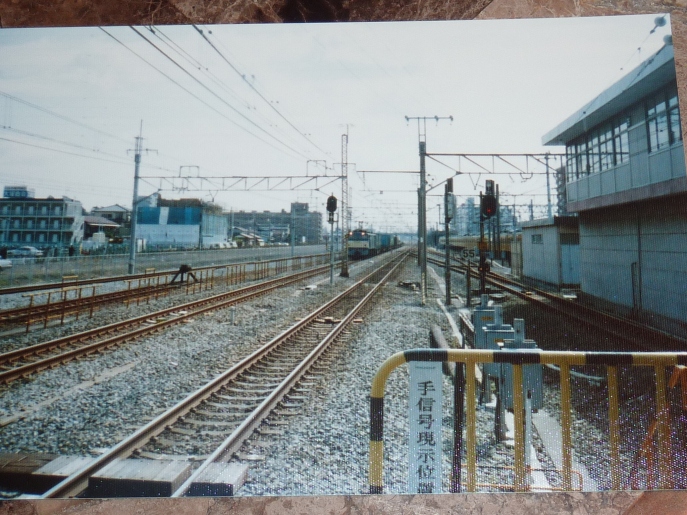 But the Me back then isn’t the Me of now.

That fiancés become ex’s and you maybe don’t come home with tens of thousands of dollars.

That sometimes your entire life that you have mapped out for yourself at 19 changes. The train jumps the tracks and that briefcase spills your life out on the tarmac and you’re back in Canada without a clue of what to do.

A foreigner in your own country feeling lost even though you’re surrounded by people speaking the same language. 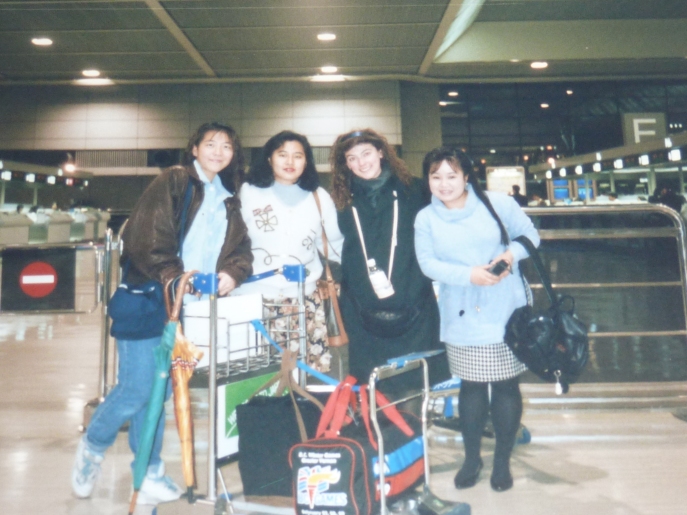 Akiko, our school secretary, Jun and the cutest assistant whose name I didn’t write on the pictures seeing me off at Narita international airport.

I am who am now because of who I was back then.

I don’t necessarily miss that young version of myself. I admire her courage and her ambition.

But I wished her well when the wheels touched down in Vancouver. 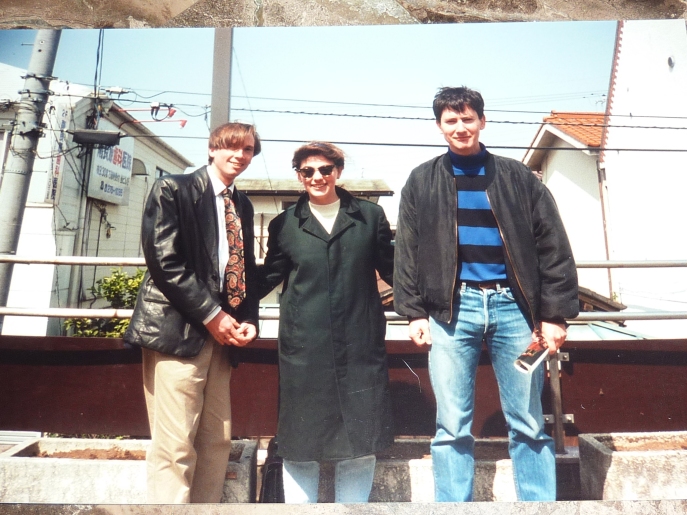 A fun afternoon with the boys. I love Chuck’s tie! 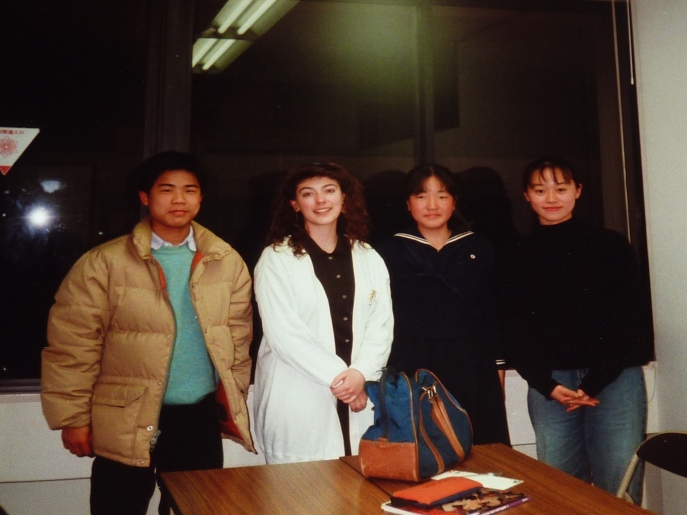 Students who were in college. We were all likely the same age but remember, Tan’iya San was 26! 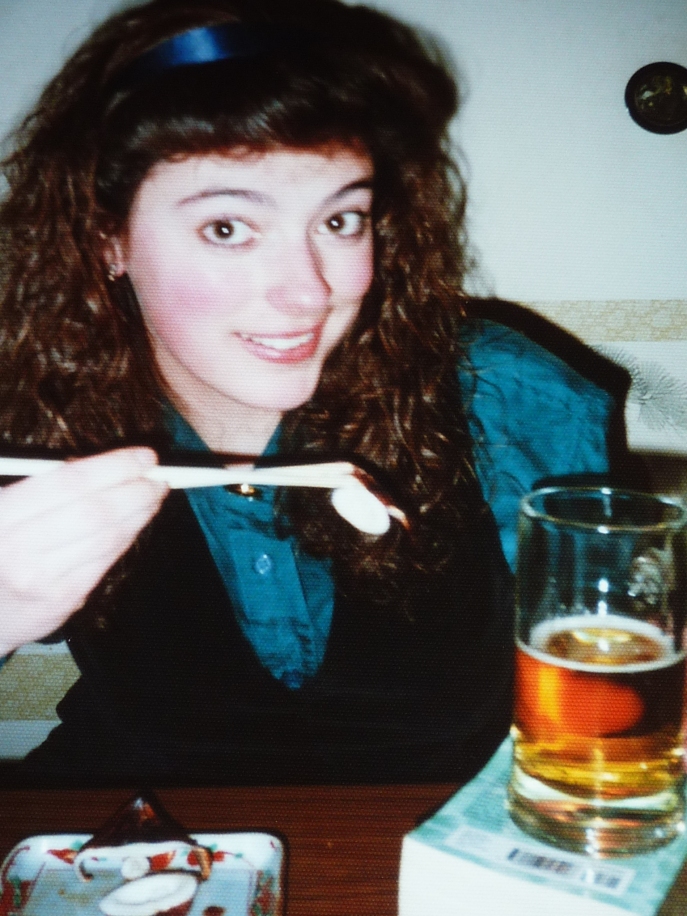 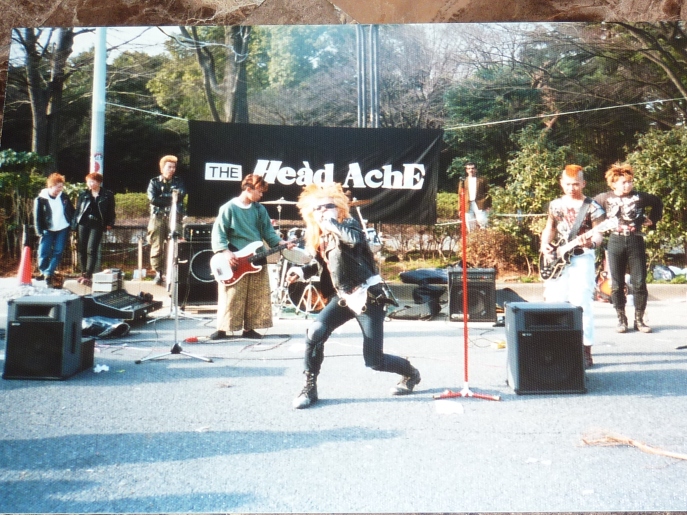 Walking around Harajuku one afternoon…. Gwen Stefani nailed that place on the head! 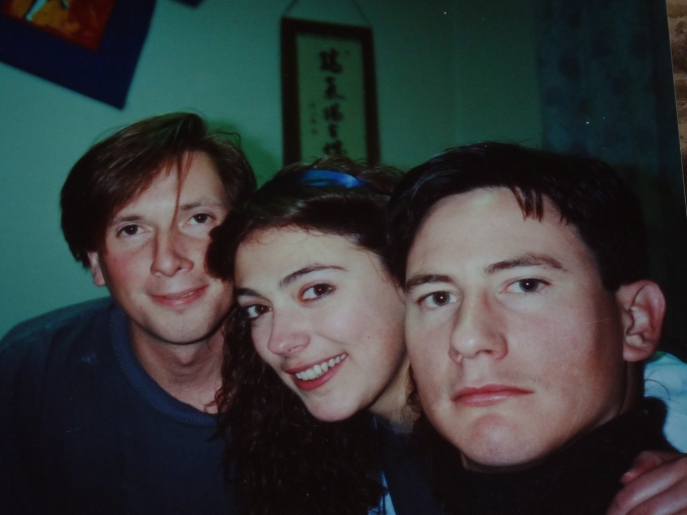