Me, last fall (this is the only picture today that is mine.)

Like me! I’ve been happening for 45 years and I’ve happened to pack a fair bit into that time frame.

World views have changed, the climate has changed, musical, social and clothing styles have changed- I’ll note that I remain a huge fan of the music from the 70’s but not so much the clothing- and the world just keeps spinning around on its axis knocking another year off its list.

In 45 years the world went from rotary dial phones and party lines to instant messaging and real-time video chats!

It took 45 years for Canada to proudly put a woman figure skater back on the top step of the World podium. 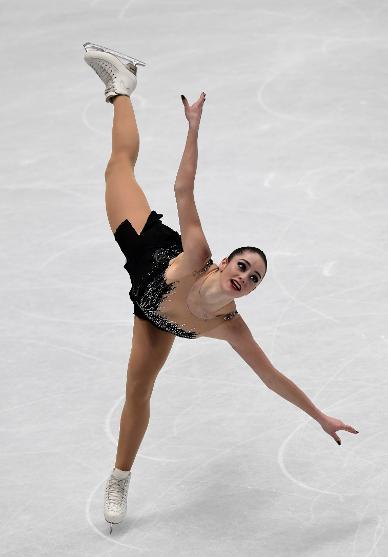 I watched with tears streaming down my cheeks as the talented, powerful yet graceful Kaetlyn Osmond of Marysville, Newfoundland soared through her Black Swan routine nailing each element with her trademark flow and speed and landed herself on the top of the podium.

It hadn’t been done since Karen Magnussen won World’s in 1973.

Josee Choinard tried but always succumbed to her nerves. Jennifer Robinson wore the Canadian crown for almost a decade when it seemed like Canada couldn’t produce a serious ladies competitor. Jennifer never, ever threatened the podium. And Joannie Rochette came close with the silver medal but not the elusive gold.

Joannie had the goods. She was fast, daring, talented and beautiful. She was strong-willed and dedicated and she finally showed she also had the mental fortitude when she competed in Vancouver days after her mother had flown in from Montreal and then died from a heart attack.

Her coaches kept her in a private, secluded bubble and the press gave her some respectful breathing room as everyone wondered if she would compete in her home country or not.

She was the current World silver medalist from 2009, though, and Canada was really hoping to get another lady on an Olympic podium since Liz Manley stood there, in second place back in 1988. Joannie’s short program was wonderful and clean and I’ll never forget the image of her collapsing onto her knees, sobbing when she finished.

She earned Olympic bronze that year, which Kaetlyn was able to repeat in South Korea this year.

Kaetlyn’s sassy Olympic short program in February (in Chloe & Isabel earrings from me!)

She leapt up 10 placings from her appearance in the Sochi games 4 years ago and was amidst a bit of a skating controversy despite the media’s lack of attention to it.

It wasn’t Kaetlyn’s fault. It wasn’t the judges’ fault, nor was it the fault of the 2 Russian skaters who won gold and silver. Its sort of the fault of the new International Judging System (IJS) that was implemented after the Salt Lake City Games where a judging scandal in the pairs event (Russians and Canadians again, go figure!) necessitated a change from the old 6.0 scoring.

The Russian champion, Alina Zagitova had all of her jumps in the second half of her program- everything done in the second half gets bonus points because if you’re a normal skater, it gets kind of hard to leap into the air the correct way, spin 3 times, maybe reach back, pick, and leap up again for 2 or 3 more rotations and land on your toe-pick and look pretty after 2 or 3 minutes.

Zagitova after her long program to win the Olympic gold last month.

If you’re a pre-pubescent 15 year-old, though, you don’t know what exhaustion feels like and your body can jump-jump-jump to its heart’s content. Its a completely unpleasant routine to watch because of the layout and also because she throws her arms in the air above her head on every single jump (another point-getter in the IJS.) (Suggestion- limit it to 2 hands-above-head jumps, please!)

These IJS bonus points are there to create an objectified way of scoring skaters. Like goals scored in hockey or a time stamp for a runner, its figure skating’s way of making things fair and keeping personal preference or nationality away from the judge’s bench.

However, for the first time that I’ve really noticed, it made for ugly routines and unappealing skating for the two Russians, unlike the stylishly-crafted routines (done by Lance Vipond) of Kaetlyn’s. 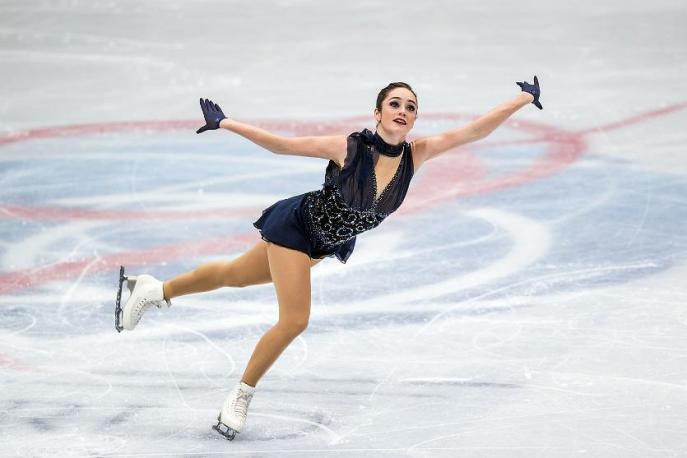 Zagitova landed everything. Her training-mate, Evgenia Medvedeva landed just about everything but she also had a strategically created routine with arms up and big tricks near the end but it was a more pleasing routine. Kaetlyn skated with tremendous height to her jumps, flow going in & coming out of them with strength and style.

I would have put Zagitova in third.

And in an Olympic year, not everyone continues on to the World championships held just weeks later. Joannie Rochette understandably did not in 2010. Tessa Virtue & Scott Moir didn’t compete in Milan this month at world’s after their Olympic glory and neither did the Olympic men’s champ, Yuzuru Hanyu.

Even Evgenia Medvedeva skipped a chance to reclaim her World title this year but young Zagitova joined Kaetlyn, Carolina Kostner, Gabby Daleman, and the 3 American Olympians, Tennel, Nagasu and Chan in Italy for the final event of the figure skating season.

Carolina Kostner after her amazing short program in Milan

Imagine the skating world’s surprise as home-country Carolina Kostner skated to 1st place after the short! Carolina, herself looked shocked and the incredible 32 year-old got to take home a shiny gold medal (they do a “small medal” ceremony for the short program podium).

Also with a small medal was Zagitova in 2nd, less than a full point behind Kostner. Kaetlyn, fighting back the post-Olympic blues, was 4th.

The post-Olympic blues exist. Not that I speak from experience but I sure would have loved a shot at that kind of depression. Highly decorated Michael Phelps is speaking out about the crash after such a high, especially when a medal or 2 is involved and I read in one of Kaetlyn’s interviews that she really had to rally to get her mind in the game for World’s.

Kaetlyn & Ravi realizing she had won bronze in South Korea. What a high! (Michael Slipchuk from Canada is off on the left.)

Rally she did, though, and after several skaters, including the surprising Wakaba Higuchi from Japan who leapt to the top of the scoreboard an hour earlier, the sad and uninspired performance of Carolina Kostner who made several mistakes in front of the supportive Italian crowd,  and the shock of all shocks when Zagitova tumbled to the ice (and off the podium), Kaetlyn had the skate of her life and leapt into first place on World ice.

Two deserving Japanese skaters joined her on the podium, Higuchi in 2nd and Satoyo Miyahara in 3rd. 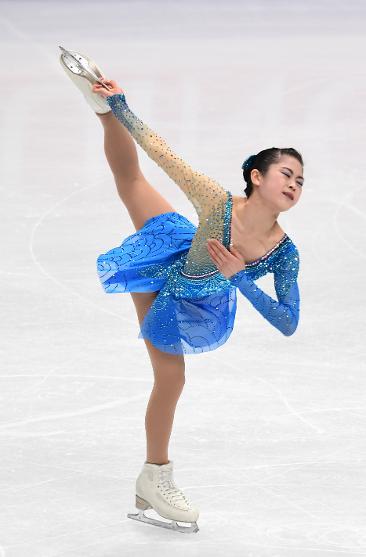 Miyahara and her teensy, tiny jumps heading for the bronze.

Zagitova and her coaches were speechless. They’ve commented since that they will review everything and try to figure out why their 15 year-old skated so terribly that day. Carolina has shrugged her shoulders and is happy with her small world medal but hasn’t announced if she’s retiring or not.

The medals were placed around the ladies’ necks and the flags were raised. All 3 took to the ice, Kaetlyn wrapped in a Canadian flag and they did their victory lap, waving to the crowd. Nobody told Kaetlyn that they’d laid a carpet down and there is ample footage out in cyberspace of her nailing it and crashing to the ice.

Everyone is giggling and smiling, including the 2 Japanese skaters who helped Ms.Osmond back to her feet. Typical Canadian, she just laughed it off. 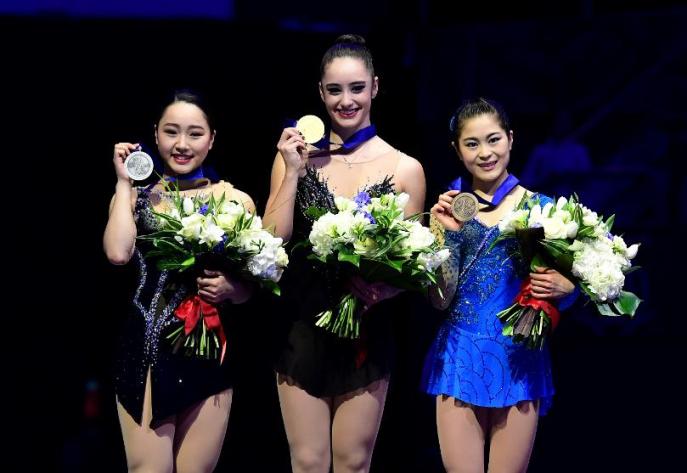 And Canada once again has a ladies world champion.

She hasn’t been back to Canada yet to receive a hero’s welcome in either of her “home towns” of Marysville or Edmonton, Alberta. She jetted off to Japan for a 2-week stint of Stars on Ice. She’ll be back in the land of the maple leaf for the Canadian 2-week Stars on Ice tour soon and I’m sure she will be adored.

I wonder if they’ll make a Kaetlyn Osmond doll like they did with Karen Magnussen (I had one! I have no clue where it is….)

At this point Kaetlyn says she is committed to continuing to compete and even wants to feel an Olympic rush yet again.

I’m so glad I’ve been here these 45 years to be a part of this. I’m so proud of my friend, Ravi, who has coached Kaetlyn since she was 10 years old. How lucky we all are to hopefully see more of this talented athlete and hey, I’m looking forward to seeing if Zagitova survives puberty (many Russian ladies are dumped at that point) and to see what she brings to the table. Will Carolina continue? How about Miriah Nagasu and the other American ladies? We need to get American ladies back on top, too.

Until next season’s B events roll around (check out Salt Lake city in the fall for the International classic- these skaters on a test run! I’ve been twice and its super cheap and super cool!), its all speculation. Regardless, GR8 SK8, Kaetlyn Osmond!

Canada’s Josee Choinard, so pretty, so talented, so stylish. Just could never get the mental hang of it.

Zagitova at World’s, still hoping to hold it together at this point.