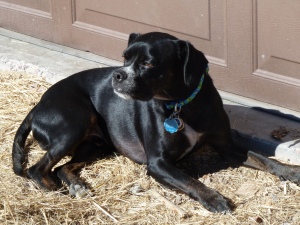 This little guy is a character.

UB joined our family about 5 years ago.

Just a little fella back then!

The economy had tanked, our town had few jobs and the young couple who owned him just turfed him onto the street when they packed up and moved to Missoula.

He had been born in Seattle and a sister of the “breeder” took him and brought him here.

Then they ditched him.

He found his way to the local animal rescue/shelter that was located in our town back then.

They brought him to my clinic where I thought he was the most peculiar looking little guy! His outstanding underbite is hard to miss but his big dark brown eyes just envelope you and you can’t help but fall in love. The day I neutered him was a slow day and he sat on my lap most of the afternoon. We bonded. 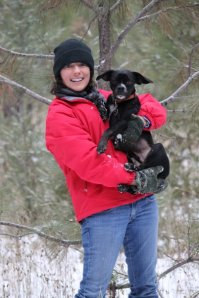 I told Alistair about him and we did that “what’s 5 dogs when you have 4” thing but we still weren’t sure. Until a bit of a farm tragedy occurred.

2 young mountain lions were wrecking havoc on our neighborhood and in the space of 2 days we lost 2 of our special barn kitties, Hissy Phitt and little Jinxie. We were both pretty devastated but then we remembered that the cute little black dog with the underbite was still at the shelter.

We got him that afternoon.

It didn’t bring my cuddly kitties back but UB went a long way towards filling that gap and now he’s practically taken over both of our hearts.

Granted, the first thing he did inside the house was take an enormous dump in our living room but, for the most part, he has fit in just fine.

That’s not to say he isn’t mischievous or sometimes a bit naughty but its so hard to stay mad at him for very long. 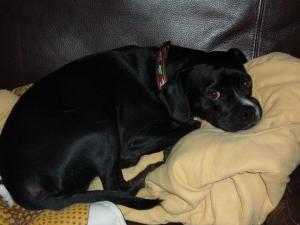 C’mon… just look at those eyes!

There was no other name that suited him besides UB (‘you be’). For his underbite.

And its easy to do his voice- just jut your lower jaw out, get a serious look on your face, sound authoritative and you’ve nailed it!

UB is in charge of the forest behind us which is why we are often saying, “Anyone seen UB?”

This statement is usually followed by the silent realization by both of us that the other 4 dogs are around and UB is nowhere to be seen.

UB loves his ‘smoking jacket’ and riding shotgun in our Ranger, “Steve”

One time we came around the front of the house to look and we were captivated by a large herd of elk running the entire width of our field.

But then we saw that half the herd was held back.

Then they would run to join the others. It was quite the spectacle.

Until we saw the little black dot in the midst of everything… like he was directing traffic. 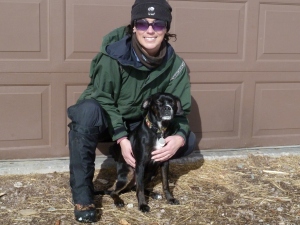 Another time he disappeared we heard him shriek in the trees and then yelp… while moving very quickly.

It was a strange sound… a moving sound… a frantic sound.

About 30 minutes later he came home, tail between his legs, limping, with a wound the shape of a paw on his side. 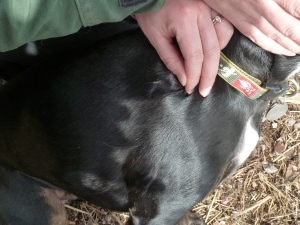 Kind of hard to see but the poor guy definitely got swatted!

I’m sure he pissed off some sleeping bobcat probably trying to lick his ear hair like he does to Mouse and Mulder. Oscar used to let him suck on his pointy little ears but now UB has to be creative. And careful!

The worst trouble he got himself (and Daddy) into was when he was still pretty new and was out back barking. Barking and barking. And barking some more. 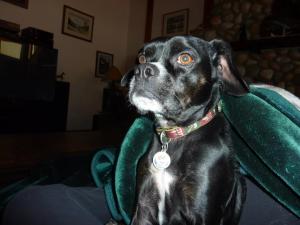 Alistair (in flip flops) went out to see if there was a poor squirrel or porcupine trapped by our ferocious hunter.

He froze when he saw the enormous grizzly bear standing 2 feet from our barking boy, just staring at him.

The bear stood up and Alistair thought, “This could be bad.” 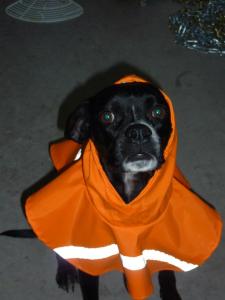 “Did I do something wrong?”

Maybe the bear wasn’t up to a confrontation with the rabid-looking Labrador and the annoying little barking thing.

Alistair and the bear both slowly backed away from the scene, which got UB’s attention.

UB, Casey and Harry (who was probably spinning circles a few feet away) were right behind Daddy when he felt it was safe to turn and run.

I’m sure in UB’s head that was just another grand adventure!

Another way to exercise and maintain those tight buns he’s so proud of.

Tight buns enable you to leap higher than a tall building in a single bound!

His voice pops into our heads as Spirit of UB no matter where we are.

If we’re on the treadmill its, “Come on, lets go, those buns aren’t going to tighten themselves!”
“You can do it, Mummy, run faster!”
“Come on, Daddy, my buns are still tighter! Do you want to see? C’mon, you can bounce a quarter off of these things!”

If we’re outside with all of the other dogs its, “Is Casey really that stupid? He just walked into the tractor blade.”
“I know, I know, I’m not supposed to chase the cats but the rules change if they run away!”
“Can I chase those elk? No?”

On the golf course we hear, “Brilliant. Just brilliant. Do you want me to go get that?”
“That would have been awesome if you had actually hit the ball, Mummy!”

“10 and 2 in my Subaru, you dreadlocked, patchouli smelling, bra burning hippie!”

With all of the miles Alistair and UB or Spirit of UB drive every month, they have figured out 2 things:

1. There are a staggering number of Subarus in the Missoula and Seeley Lake area; and,

2. Almost all of them are driving ridiculously slow. Leading a pack of semis and old trucks pulling boats and moving vans. Old Subaru is right out in front.

Once I started to pay attention, I realized there was some truth there.

So UB has started shouting out comments from the passenger seat.

Discussing the merits of Subarus with my bar buddy, UB

UB appreciates that there are exceptions, like Aunty Dona.

But then Aunty Dona and Uncle Gary bought him this.

Somebody is SO impressed with his new bandana… thanks, Aunty Dona & Uncle Gary…. can’t wait to pee on your Subaru’s tires next time you’re here…

So that’s the story of our strange little mixed breed stray (DNA blood testing says he is a 50/50 mix of Boston Terrier and Cocker Spaniel. We’ve decided he is a Bostonocker Sperrier.)

Shelter dogs all have their own stories and they often make fabulous companions.

He adores everyone he meets, usually preferring humans to dogs if given the choice.

UB just basically helps himself to anyone’s lap, including Uncle Pete with Cleo right there for cuddles

Visiting Aunty Angel up in Canada this summer

He does take his job as Loki’s seeing eye dog very seriously and has been quite concerned about her injured left eye.

The eye is maybe starting to heal but her new heart murmur is a bit alarming and her probable zero thyroid is also something new. 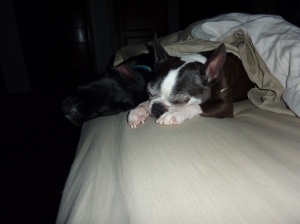 UB, making sure Loki had someone to cuddle up to under the covers

Our merry band of misfits fits right in on the Fyfe Farm. They love and we love and its kind of like another Happiest Place on Earth.

And a bizarre dislike of Subarus.

By the way… has anyone seen UB? 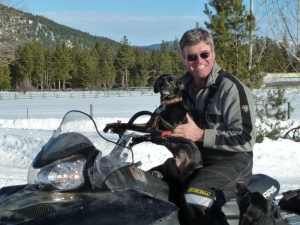 “Why drive a Subaru when you can drive a snowmobile? I’m an excellent driver, right, Daddy?”

5 thoughts on “Anyone seen UB?”