I had the opportunity to revisit what being neighborly is all about again on my most recent trip back to Bismarck.

I’ve had to go back twice within the space of 4 weeks to have 2 crowns created and then placed. One trip was by car. The other was by plane.

My seat-mate on the United flight out of Missoula was an interesting guy. Initially, I didn’t talk with him, preferring to stick my nose in my Sudoku book and read all about Jane Goodall in the in-flight magazine. Also, his travelling companion had THAT child on her lap.

You know the one.

The 2 year old who screams in the gate area. Then screams as they board the plane. Don’t forget the wailing during takeoff and then the incessant screaming during most of the flight.

It seemed best to let ‘Keith’ help his sister with all of that.

But then the screaming turned into mild burbling and the plane began its initial descent.

I started laughing, which Keith noticed.

“I’m laughing because the last time I was on a United flight headed for Denver we hit some massive turbulence and the drunk lady next to me woke up screaming and grabbing at me,” I said.

And so began a very neighborly discussion.

Keith, it turned out, is an intelligent guy. He studies corn and ways to make stronger crops grow in different climates and soils. He lives in Iowa (go figure) and travels all over to study and share what he learns about corn.

Then we talked corn sex.

Part of my timing on that trip back was also to help Alistair with the hay.

We generally purchase large round bales to feed the horses but we also have a small 5 acre field that we put up ourselves. 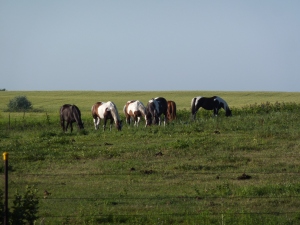 some of the gang

Haymaking is both science and art.

I knew nothing of this having grown up in an ice rink, living in cities most of my life but I have come to respect the knowledge, patience, timing and work that goes into making good hay. 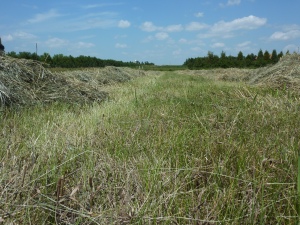 good hay on the ground, nice and dry

You watch the weather report for days, knowing you need 4 or 5 days in a row without rain.

You check moisture in the mornings and humidity in the afternoon because you only want dry hay heating up in your hay barn and you don’t want mold.

You cut the hay, letting it lay in parallel long rows of pale green with the occasional fleck of purple alfalfa peeking through.

You check for stems, you twist to see when it breaks and you curse at the rodent mounds that bung up your swather.

When the stars align, its time to bale.

Our new neighbor was eager to get on the baling bandwagon this year. They have just moved in this summer and he fully admits he knows nothing about farming but he’s super keen to learn. We told him how the neighbors on his other side all share the equipment and the labor with us- its what we have all done since 1998 and many hands make for light work.

And shared sweat and a common purpose to get the hay from our lands into our barns to feed our horses.

the ND herd going for a run

New Neighbor’s wife was away but he said he’d be there at 1:30 to help. He said he’s like a machine once he gets going on a task and that he wouldn’t eat or drink until the job was done.

So, 1:30 the next day we got our jeans and sunblock on and Alistair started turning the parallel rows into neat rectangular bundles of dried nutrition. It hadn’t seen a speck of rain. It is good hay.

One of many loads

I started loading up the trailer by myself because, as it turned out, New Neighbor locked himself out of his house and had to drive all the way back into town for his spare keys.

By the time he got back, the other neighbor had spotted us and joined the team.

Howard is a lifetime farmer who has helped us with our hay just about every year. Alistair helps him, too and we share equipment and labor and that’s just how it is done.

There is nothing like seeing a truck and trailer pull into your field when you are baling. Even if only one man jumps out, it creates within you the happiest of feelings, knowing one more set of hands is there.

We got into the peaceful routine of lifting, stacking, driving and unloading only to stack again in our hot, dusty barns.

New Neighbor was sort of getting the hang of it.

He whined a bit that Alistair had the easy job of driving the tractor, pulling the baler.

I didn’t tell him that Alistair would have a kink in his neck for 2 days from watching behind him and that he would cough up dust for about a week afterwards.

I didn’t tell him how much our Ford tractor cost, or how fiddly the baler is when he whined some more seeing Howard take a turn.

Random bale by the road

New Neighbor was no machine.

“I don’t know how old you guys are, but I’m really feeling being 30 years old,”  he announced during one of his many sit-down-on-the-bales-and-guzzle-water-that-I-brought-catching-his-breath-breaks.

waiting to be picked up

I mean, you are and you aren’t okay.

There are moments when you wonder what a heart attack really feels like.

Moments when you think you kind of might want to die, actually.

But you keep going and you hop out of the truck and you lift another bale while Howard takes a moment to organize and stack what is already on the trailer.

Howard didn’t bother telling New Neighbor that he was in his mid-60s.

Granted, the guys usually let me drive the air conditioned trucks because I am a bit of a little girl but I still got out and hauled bales and stacked and sometimes I just had the windows open because I felt bad the guys didn’t have AC.

Farming is tough work and its usually done on hot, dry days. But you just suck it up and do it.

Because its your land and they’re your horses and its free feed that you don’t have to buy and it hasn’t been rained on and, damnit, it needs to get done. 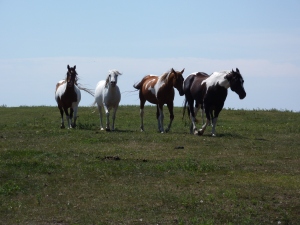 We did New Neighbor’s field first and then we started on our field.

Howard’s wife joined the team when she got home from work. She brought lemonade because she’s done this with all of us since 1998 and she is a good woman.

We reminisced about when their daughters and my stepkids and the original neighbors in New Neighbor’s house would all show up with water jugs and bale hooks and goggles and same-old-farm-shirts and gloves and work ethic and we would work each other’s fields for hours and days.

We talked about how the kids are all doing now and how Kathy is looking forward to retirement.

Happy to smile, even when we’re working our butts off

We stacked. Sweat beaded on our bodies. We unloaded.

We didn’t finish our own field that evening but got going on it in the cool of the morning the next day. 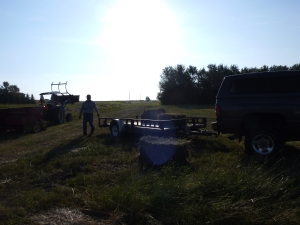 Early morning before it gets too hot.

New Neighbor had to go to Fargo so it was just Alistair and I.

Howard desperately wanted to help but it was his one day of the week he watches his 18-month old grand-daughter.

He still came over so we could meet the adorable little girl who looks so much like her mother it made my heart break.

Howard’s daughter died a few weeks after she gave birth to the little one, which was the one thing nobody talked about. 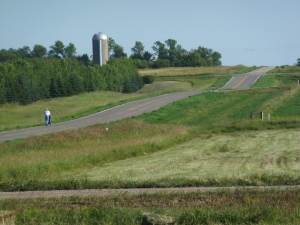 Tears mixed with sweat as I watched this tough farmer and his grand-daughter walk back to his farm in the warm morning sunshine.

There were a lot of unspoken memories shared as we heaved hay bales onto trailers and stacked them high into the barns.

Because that’s how it is on the farm and every year its the same thing.

Even if everything is different.

And we are lucky to have good neighbors, even the keener who struggled to keep up.

the view down Friendship Trail

We didn’t name it that.

We were the first New Neighbors on the block way back when.

And so, after two long hot days our barn is once again full of sweet smelling hay and we’ve reconnected with our neighbors and Alistair’s arms were dragging on the ground and we feel good but tired after such hard work.

My view of my husband for 2 days

To quote the Rankin Family, ‘the hay… the hay is finally in.’ 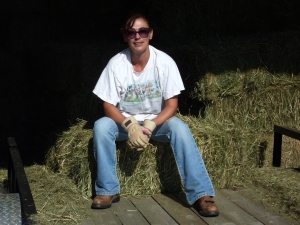 6 thoughts on “A Neighborly View”