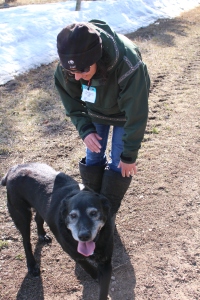 In fact, they’re all a bit on the crazy side.

The 5 of them are a rag-tag motley crew of misfits who ended up here by various means with questionable pasts.

If you’ve met him, you’re already nodding your head. Especially my brother and his 3 sons who were cheerfully mauled by our excited Labrador after they ignored my one request: Do not open the kennel door until I get home.

Physical and mental scars are what remain of Casey’s big chase of the 2 older boys. My only answer to them is: “Danny did it. Danny let the dogs out.”

We keep waiting for Casey to mature and ‘grow out of’ his insane need to be with us, on top of us, licking us, loving us. I think we waited too long, though, because its too late to train him to be anything other than what he is. Its endearing, as long as you’re not knocked over into a mud puddle, trying to whack him with your crutches after you just had ACL surgery (true story). (And kind of funny picturing Casey deftly deke each swipe Alistair took at him).

We cut Casey some slack, though.

I met him in vet school, as residents were parading this cute little 3 month-old black lab puppy around in their arms. He couldn’t walk on his own because his owner had beat the snot out of him, fracturing both of his femurs in several places.

One of the surgeons said it had to have been a baseball bat or something similar to create such fractures.

I watched my arm go up in the air as the residents said they could try to save this puppy only if someone volunteered to take him home when he was well. 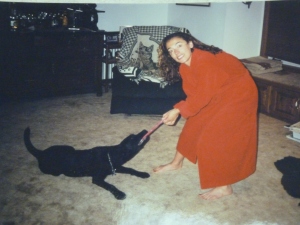 After several months and several surgeries with hardware inserted into his limbs, happy young Casey came home to the Fyfe Farm. I have a bit of guilt over the fact I didn’t visit him that much during his surgeries and infections because I didn’t want to fall in love with him and have him end up breaking my heart if things “didn’t work out.”

They did work out and Casey hasn’t looked back.

He and Loki were young pups and besties together. Its amazing revisiting old pictures of them in their healthy young bodies, knowing they are very different bodies now.

Bodies that don’t jump as high as they used to. Bodies that need anti-inflammatories regularly to enable easy movement. Bodies that don’t see because the cataracts have taken over. Bodies that sound like Darth Vader because of a floppy laryngeal fold that could become life threatening at any time if the other fold decides to become paralyzed.

Casey’s larynx has been like this for a few  months. If it stays one-sided, he’s good to go as long as you don’t mind the raspy breathing. If he would settle down and move more slowly he might be able to breathe better but as I’ve said, he isn’t slowing down.

There is a surgery but it would essentially open up the passage to his trachea, allowing food or water to get into his lungs if he gulped it down (which he does). That leads to ‘aspiration pneumonia’, which isn’t cool for anyone and is also life-threatening. So we don’t do the surgery unless the paralysis becomes bilateral, or two-sided. Which would definitely lead to aspiration pneumonia.

So what do you do?

Alistair and I both know Casey has had a fabulous life as a Fyfe. We’ve figured out and learned to manage his terrible allergies to chicken and he’s been able to eat every body part or bone of every animal carcass he can find here in the forests of Montana. He’s been boating, “shed”-hunting, trail riding and hiking and he even has a trophy from an Agility Trial he ran with his Dad. 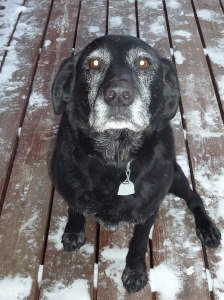 He’s more grey each year but then so am I. Part of my reluctance to accept that my companions are aging is that it means I am aging along with them.

I don’t jump as high as I used to. I take anti-inflammatories fairly regularly for my knees. Its just that they seem to age faster because a year for them is like six or seven for us. What happens gradually to my body is happening right before my eyes to Casey and Loki. And Boomer. And Harry. Fyfe’s Farm for Wayward Pets is becoming Fyfe’s Senior Citizen Central.

Which is why we don’t train our dogs to do anything but be themselves. My only rule is “donate your reproductive organs at the door and get along.” And they have, and they do.

I will do what is right by my old friends when it is time. Like I had to with Oscar. It will break my heart, as I always worried Casey would, but it won’t be about me at that point.

Incidentally, going through my old pictures, I found one of a very young Oscar with a very young Whitney. It makes my heart happy and sad at the same time, which is fine by me.

So, if you visit us, know that you will be leapt upon by Casey and his merry band of buddies. You might get muddy and you have to listen to his croaking bark as he yelps for whatever reason he’s yelping. Expect cheerful, non-trained behavior and feel free to leap and jump along with them. Love and be loved, don’t open the kennel door without me, and get along.

11 thoughts on “Captain CrazyPants (or, the case for Casey)”